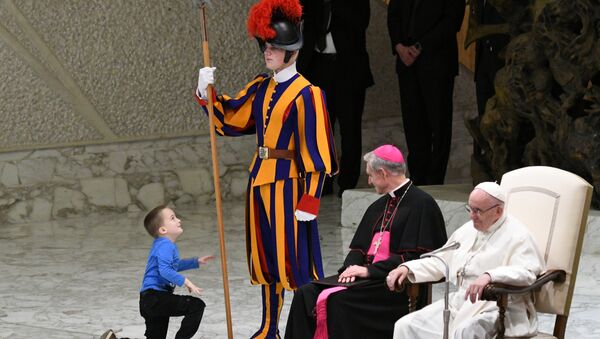 Pope Francis was addressing a packed hall on Wednesday when a six-year-old stage crasher interrupted the pontiff’s general audience at the Vatican.

A little boy stole Pope Francis’ spotlight, having managed to break through security, storm the stage and rush towards a colourful Swiss guard, who was standing just a few metres away from the Pope.

The child playfully tugged on the guard’s sleeve and at one point started rolling around on the floor in front of the pontiff.

A little boy who is unable to speak escaped from his mother and broke through security to run up to Pope Francis. His mother told the pope the boy is mute, so Francis said "leave him to play here." https://t.co/UG0hgU8aAI pic.twitter.com/GP7YoX9sTE

In a few seconds, he was joined by a girl, presumably his little sister, who made vain attempts to pull her brother from the papal podium – and that’s when his mother stepped into the game.

This autistic boy slipped away from his mother and went on stage during the pope’s general audience today in Rome. The 7-year-old lives in Italy with his parents, who are from Argentina. (📸: Vatican Media) https://t.co/7EOfl8sH47 pic.twitter.com/TpzyTCGSD7

As the gathering continued, she reportedly explained to the Pope that the child was speech- and hearing-impaired, and that the family had Argentine origin – and the pontiff allowed him to keep playing on the stage, saying ‘Leave him, leave him to play here’.

‘This child cannot speak. He is mute. But he can communicate. And he has something that got me thinking: he is free. Unruly… but he is free. It made me think, “Am I also free like this before God?” Let’s ask the grace [of God] that he may speak’, the pontiff tod the pilgrims to applause from the crowd.

As the family left the stage, chuckling Pope Francis leaned towards Bishop Georg Ganswein next to him and said: ‘He is Argentinian. Undisciplined’.

A young boy upstaged Pope Francis on Wednesday, escaping from his mother and running onto the papal podium at a general audience.

The video of the upstaging went viral, but social media users didn’t seem to be as amused by what had happened, largely alluding to the allegations of child abuse by Catholic priests:

A boy, Vatican, playful, Pope in the same sentence. I am not gonna click that link

Hmmmm little boys and Catholic priests? What could go wrong? 🤨

lucky all the priests were behaving that day

Some, however, thought that the video had positive vibes:

This video made me smile, I know the Catholic Church has some very bad members and institutions, but it's nice to see the good stories

Love how he went straight for the soldier 😉💋

For me, there is more spontaneous joy, hope, kindness, innocence, goodness, humanity in this moment than in all the moments I have seen in my days, on and offline. The other footage of the mother and the pope is priceless, too.

Most recently, Pope Francis ordered to arrange a Vatican summit to address a clerical sexual abuse scandal following revelations of widespread abuse and cover-up in the state of Pennsylvania, US. The report detailed some 1,000 cases of child abuse by 301 Catholic priests. The meeting is expected to take place on 21-24 February.