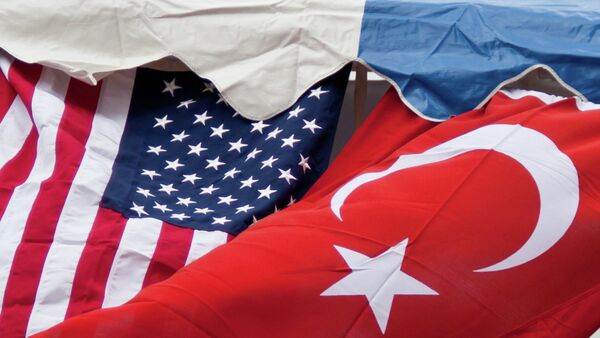 © Flickr / Victoria Pickering
Subscribe
The street in Turkey’s capital city where the new US embassy will be located is now named in honor of the black Muslim US civil rights leader El-Hajj Malik el-Shabazz, better known as Malcolm X. The move has been interpreted by some as a slight against the US.

Ankara municipal workers switched out the street signs Thursday at the end of the block of what was formerly called 1478th Street. The new sign reads "Malcolm X Caddesi," in accordance with a unanimous city council decision last month.

The street,where the new U.S. Embassy building in Ankara is built, has been renamed as "Malcolm X" Street after Turkish President Erdogan's directive. pic.twitter.com/4hcJmLpgrQ

​"The street was given the name of US Muslim politician and human rights defender Malcolm X, about whom President Recep Tayyip Erdogan said, 'We will make his name live on in Ankara,'" Ankara's municipality said in a statement published by the Anadolu news agency in October. Erdogan reiterated the promise to the civil rights leader's daughters at a meeting in New York later that month.

By 2020 the site will be the home of the new US embassy, a nine-acre compound presently under construction.

Malcolm X was born in 1925 in Omaha, Nebraska, and became an influential leader of the Nation of Islam, a Muslim black nationalist organization that rejected the politics of assimilationism favored by moderate black leaders in favor of preaching autonomy, independence, armed self-defense and pride among African-Americans, a division epitomized by his commonly used phrase "the ballot or the bullet." He was assassinated in 1965 in New York by NOI members after he repudiated their doctrines and started rival organizations, such as the Organization of Afro-American Unity, based on his new philosophy.

The US Embassy in Ankara hasn't made mention of the name change at all in statements or on their Twitter account.

Turkey isn't new to the game of renaming embassy streets to give their residents embarrassing addresses. Back in February, the street where the present US embassy is located was renamed "Olive Branch" (Zeytin Dali in Turkish) after the name of a Turkish army offensive against US-allied Kurdish groups in Syria to which Washington had objected. The previous month, the United Arab Emirates' address was changed following a spat over actions by the Ottoman Empire in Medina, where the prophet Muhammad is buried. Turkey is the successor state to the Empire, and they changed the street name to that of the Ottoman governor of Medina during the time in question, the Times of Israel noted.

The US, too, has played this game. The street in front of the Russian Embassy in Washington, DC, is named after Boris Nemtsov, a Russian politician whose 2015 assassination some US government officials believe the Russian government had a hand in. Lawmakers recently tried to rename the Saudi embassy's location, too, after Saudi journalist Jamal Khashoggi, in whose murder the Saudi government has been implicated.