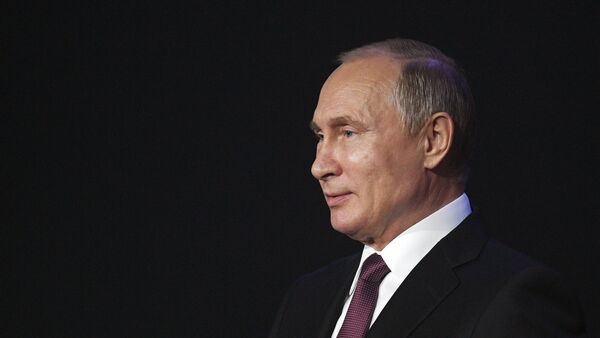 © Sputnik / Valery Melnikov
/
Go to the photo bank
Subscribe
Russia and Ukraine are in the middle of a diplomatic impasse after three Ukrainian warships illegally sailed into Russia’s territorial waters and ignored legal demands to leave the area, which Moscow denounced as a provocation and violation of international law.

In light of the Russia-Ukraine standoff in the Kerch Strait, James Stavridis, a retired US Navy Admiral and former military commander of NATO, penned an article for Time to call on President Donald Trump to ‘strongly affirm’ US support for Kiev ‘in every dimension, including providing them with capable defensive armament’.

‘Most of all, the President ought to make the point that it is in no one’s interest to stumble backward into a full-blown Cold War, let alone have an actual war inside Ukraine. Perhaps by appealing to Putin’s pragmatic side, we can defuse this crisis before it spirals into something we cannot control’, he wrote.

France, Germany Reportedly Against New Sanctions on Russia Over Kerch Strait Row
According to the admiral, the recent crisis between the two neighbours can be traced back to 2014, when 97 percent of Crimea’s population voted to reunite with Russia, something which hasn’t been recognised by the international community and is still largely viewed as an ‘illegal annexation’.

Stavridis claims that Russia needed to ensure communications between the mainland and the peninsula, which implies establishing control of the Kerch Strait located between the Black Sea and the Sea of Azov.

The former NATO commander noted that President Trump planned to hold a meeting with his Russian counterpart, Vladimir Putin, on the side-lines of this week’s G20 summit:

‘For the Trump Administration, though, this will be another testing point in its notably odd relationship with Russia…’ he wrote, at the same citing ‘a strong stand’ that Secretary of Defence Jim Mattis and National Security Adviser John Bolton had taken against what he called ‘Russian bad behaviour’.

Stavridis further wrote that while the US has ‘correctly’ pushed for sanctions following Crimea’s reunification with Russia, President Trump has much to catch up on, and the upcoming meeting with Putin lays grounds to reassess his stance.

The retired admiral went on to accuse Russia of violating international law in its relations with Ukraine, claiming that sanctions will remain in effect until Moscow ‘modifies its stance’:

‘The President must show zero daylight between the US and our NATO and European allies on this issue, or Putin will exploit the seams to continue toward achieving his ultimate strategic goal of unraveling the trans-Atlantic alliance’, Stavridis penned.

Earlier in the day, President Trump said that he might call off his envisaged meeting with Vladimir Putin at the G20 summit in Argentina in wake of the naval incident in the Kerch Strait.

The ships ignored Russia’s demands to leave the area and proceeded to make ‘dangerous manoeuvres’, thus prompting the Russian side to open fire and eventually seize the ships.

Moscow has described the incident as a provocation in violation of Articles 19 and 21 of the United Nations Convention on the Law of the Sea and pledged to suppress any attempts to challenge its territorial integrity and sovereignty.

000000
Popular comments
This retired Navy Admiral should stay home and spend more time with his family and grandchildren if he got any. Really nobody gives a hoot about his opinions.
elloboferoz
28 November 2018, 17:13 GMT5
000000
elloboferoz, He has been promised a huge pay cheque by the arms industry to intervene so that more arms contract can get to them. Honestly Mr Putin deserve peace noble price for his patience. Any other president among the western countries would have nuke this continent and beyond for this daily nonsense about Russia this Russia that sound.
S-400
28 November 2018, 17:37 GMT5
000000
Newsfeed
0
New firstOld first
loader
LIVE
Заголовок открываемого материала
Access to the chat has been blocked for violating the rules . You will be able to participate again through:∞. If you do not agree with the blocking, please use the feedback form
The discussion is closed. You can participate in the discussion within 24 hours after the publication of the article.
To participate in the discussion
log in or register
loader
Chats
Заголовок открываемого материала
Worldwide
InternationalEnglishEnglishMundoEspañolSpanish
Europe
DeutschlandDeutschGermanFranceFrançaisFrenchΕλλάδαΕλληνικάGreekItaliaItalianoItalianČeská republikaČeštinaCzechPolskaPolskiPolishСрбиjаСрпскиSerbianLatvijaLatviešuLatvianLietuvaLietuviųLithuanianMoldovaMoldoveneascăMoldavianБеларусьБеларускiBelarusian
Transcaucasia
ԱրմենիաՀայերենArmenianАҧсныАҧсышәалаAbkhazХуссар ИрыстонИронауОssetianსაქართველოქართულიGeorgianAzərbaycanАzərbaycancaAzerbaijani
Middle East
Sputnik عربيArabicArabicTürkiyeTürkçeTurkishSputnik ایرانPersianPersianSputnik افغانستانDariDari
Central Asia
ҚазақстанҚазақ тіліKazakhКыргызстанКыргызчаKyrgyzOʻzbekistonЎзбекчаUzbekТоҷикистонТоҷикӣTajik
East & Southeast Asia
Việt NamTiếng ViệtVietnamese日本日本語Japanese中国中文Chinese
South America
BrasilPortuguêsPortuguese
NewsfeedBreaking
05:31 GMTCOVID-19 Live Updates: Malaysia Detects First Case of Omicron Variant
05:29 GMTISS to Perform Avoidance Maneuver Against Space Debris on Friday
05:23 GMT37 Years After Bhopal Gas Tragedy, New Series ‘The Railway Men’ to Pay Tribute to the Unsung Heroes
05:23 GMTAmerica's Epidemic: The US’s Massive Mass Shooting Problem
04:10 GMTUS Midterms 2022: Democrats Fear Congressional Shakeup as 19 House Dems Will Not Seek Reelection
04:04 GMT'I Knows It's Not Me': Alec Baldwin Says He's Not to Blame for Fatal 'Rust' Shooting
02:17 GMTThe Harris Shuffle
01:26 GMTUS Government Actions Urgently Needed to Better Protect Critical Infrastructure - Report
00:52 GMTIranian Scientists Recruited by Israel’s Mossad Behind Explosions at Natanz Nuclear Plant - Report
YesterdayUS, EU Diplomats Emphasize Need to Cooperate With China Where Possible - Joint Statement
YesterdayUS Signs $415Mln Deals With 3 Companies to Design Commercial Space Stations - NASA
YesterdayBiden Admin Finalizes Plan to Reinstate Trump-Era 'Remain in Mexico' Policy at Southern Border
YesterdayManchester United's Michael Carrick Steps Down as First Team Coach
YesterdayUS Congress Passes Spending Bill to Stave Off Government Shutdown, Measure Heads to Biden
YesterdayWall Street Rebounds as Heat Fades on Omicron, Dow Jones Up Almost 2%
YesterdayFTC Sues to Block $40 Billon Merger of US Chipmaker Nvidia With UK’s Arm Ltd
YesterdayCristiano Ronaldo Scores 800th Goal for Club and Country
YesterdayGunman at UN Headquarters Not Terrorist Threat, Came to Deliver Documents - Police
YesterdayRussian Prosecutors Launch Probe Into Whelan's Complaints of Prison Corruption - Brother
YesterdayNewly Disclosed Docs Reveal DoJ Investigating Andrew Cuomo Over Sexual Harassment Claims