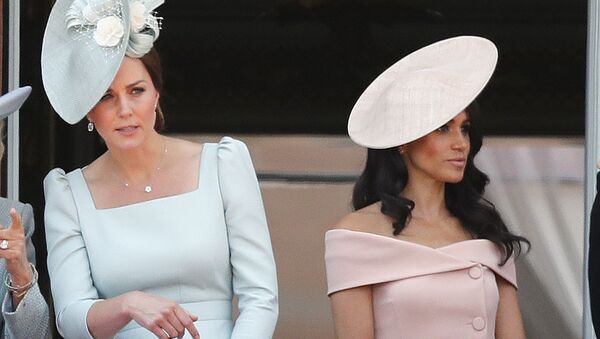 © AP Photo / Frank Augstein
Subscribe
International
India
Africa
The royal newbie is said to have come up with exceptionally strict demands over her and Harry’s big day, and they even extended to the way the Duchess of Cambridge’s children were supposed to look. Fresh reports support the currently swirling rumours of a fracture in the sisters-in-law’s relationship.

The newly-minted Duchess of Sussex left her sister-in-law Kate Middleton weeping over her strict demands with regard to Princess Charlotte’s bridesmaid dress, The Daily Telegraph reported, citing two separate inside sources.

'Kate had only just given birth to her third child, Prince Louis, and was feeling quite emotional', one of the insiders told the edition, claiming the mother-of-three was 'left in tears' following a dress fitting for the princess.

Charlotte, Kate and William’s second child, had just turned 3 at the time and was supposed to be a royal wedding star in May, along with her older brother, George.

Meghan, 37, is understood to have insisted on 'the very best' for her big day — but Charlotte’s  fitting, just weeks before the much-anticipated Windsor nuptials, did not go in line with her wishes and proved 'stressful' for Middleton, The Sun quoted its sources as saying.

The Telegraph said the incident occurred around the time Meghan also 'upset' the queen by asking to wear an emerald tiara instead of the one offered by the monarch, who even had to give a firm word to Harry to sort the issue out.

The reports underpinned rumours of a 'royal rift' between Kate and the Duchess of Sussex, even more so in light of recent news on the royal couple of Harry and Meghan’s decision to move out of Kensington Palace, where they have been residing since their engagement last year.  However, multiple royal sources cited by British media have denied the idea that a spat might be the reason for the 'fab 4' to part, but more likely that it is space concerns and a strong wish to escape the limelight.

Meanwhile, the sisters-in-law made their first appearance together a month after the May wedding at an event in Cheshire, after which they chose to stand on separate balconies during this month’s Armistice Day commemorations.