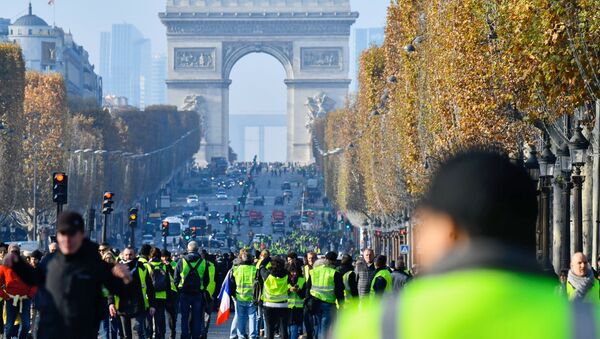 French President Emmanuel Macron has pledged to stand firm against rioters who have carried out protests over fuel taxes. In a speech, Macron stated that violence would not force him to step back from his government's energy policy.

The news comes as Paris has been facing violent anti-government protests. According to police reports, some 30 people have been injured and over 100 detained. Large-scale ‘yellow vests' rallies began in France on November 17 over a rise in fuel prices. Radio Sputnik discussed the issue with Gino Raymond, professor of modern French studies at the University Of Bristol.

Sputnik: Macron's yearly increase of fuel taxes has already led to these widespread yellow vest protests. What do you think his vow to push the fuel taxes further up will do, in terms of how this will affect the protests?

'Shame on' Protesters: Macron Condemns Violent 'Yellow Vests' Rallies in France
Gino Raymond: I think, most people agree, that it's become a wider ‘carte de doléance', the French would call it, or grievances against his leadership of France. Yes, the fuel protests is one issue and it's a major issue, but I think, people who have been talking to various members of the ‘Gilets Jaunes' movement, the yellow vest movement, you can see, that it's actually broader than that, it's about the cost of living, it's about the disparity between the rich and the poor, it's about the fact that many people in France feel they're just not managing.

Not just because of the fuel rises, but because of low income and the fact that so many of the benefits, which they thought they were able to count on have actually been either cut back or not rising in line with the cost of living. So, now you have a kind of increasingly generalized expression of discontent with the cost of living in France and the effect it's having on ordinary people.

Sputnik: How severely have Macron's image and his popularity suffered already as a result of this particular issue?

Gino Raymond: Well, it's very interesting; going by interviews with the various representatives… Well, in fact, they don't really have representatives, it prides itself on being a spontaneous kind of citizens' movement, but in interviews with individual members of the movement, they talk about his reform of the ISF, which, in fact, was a wealth tax — in French it's called: ‘L'Impôt de solidarité sur la fortune'.

Macron's European Army Violates States' Sovereignty - French Rally Party
It was a tax on wealth. This was reformed by Macron, it became a much narrower tax on property. You had a lot of people thinking: 'Well, here we go! This is really a president, who's much more interested in making life easier for people with money to invest, with entrepreneurs. He is a president, much more interested in the rich, rather than ordinary struggling people'.

Sputnik: Do you feel that there is a major problem with income inequality and distribution of wealth in France? Is that increasing, since Macron has taken power?

Gino Raymond: That is a general perception. France has a very significant public sector, which needs to be financed. On the one hand, the government is trying to cut back on the public sector, cutting back on jobs, for example in teaching and in other areas. But it still is a public sector that needs a lot of government finance and that money isn't there.

Last year, there was an increase in growth in the economy, but that's beginning to slip back and the major overriding problem for decades in France has been high unemployment, especially amongst the youth. So, with the projections for the economy taking a downturn, all of these issues have begun to bubble up and boil to the surface in this discontent.

Sputnik: Macron has said that the ‘war scene' on the Champs Elysees was really ruining France's reputation abroad. Do you think that is the case and what really have these protests done for France's image and reputation general?

Gino Raymond: I think Macron is acutely aware of the damage to France's image. If you read more generally in French politics, in particular, what Macron has been heavily involved in, which are the negotiations over Brexit. Brexit was supposed to be an opportunity for France to benefit from the departure of Britain from the European Union because France would become a much greater magnet for investment, for foreign business, and so on.

Merkel's Possible Successor Slammed as 'Trump Light' Over Migrant Crackdown Call
This has been a Macron's line since he was elected, which is that France was open for business, open to the world and he would attract inward investment. It would alleviate problems like unemployment and so on. Of course, Macron has also been trying to stride the European stage, as, if you like, a successor to Merkel as the 'great leader of Europe', the man, guiding the European project.

So, when you have this kind of violence, occurring in your capital and in the showcase avenue of your capital, which is the Champs Elysees — the French themselves are always calling it the most beautiful avenue in the world. This has to damage the image of the country, and, of course, the aspirations Macron has to be a great international leader.

Gino Raymond: I think, the government is looking now for a way of calming the situation. One of the difficulties faced by the government is it doesn't know whom to negotiate with, because there isn't an identifiable leadership for this movement. It is trying now to come up with suggestions of ways of helping those most disadvantaged by these hikes in fuel taxes, finding ways of mitigating this, finding payments that could attenuate the consequences of this.

You could argue that this may go some way to calming the situation, but there is a sense in which the abiding grievances go very deep. There might be some progress on the front of the fuel issue, but on the wider issues, the discontent is continuing to grow.

Sputnik: What can the government do to carry out their initiative and avoid additional protests?

Gino Raymond: They've got to find people they can engage with. There has to be a dialogue that can begin. I think the government will also rely on the fact that this spontaneous movement will have to subside. And there is this phenomenon in France, and it is a very peculiar phenomenon, in that you get mass movements that push the country in the direction of turmoil or social disturbance, but then, there is a kind of conservative reaction.

Views and opinions expressed in the article are those of Gino Raymond and do not necessarily reflect those of Sputnik.