Federal Reserve Warns of Vulnerabilities in US Financial System 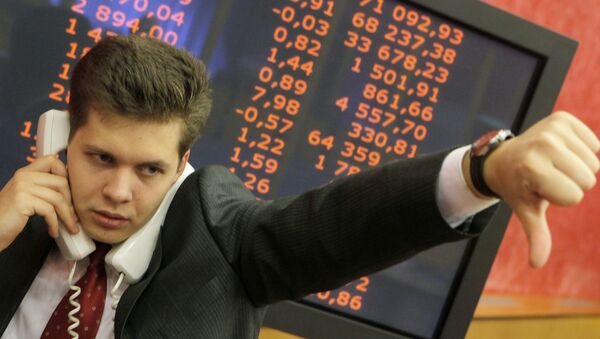 © Sputnik /
/
Go to the photo bank
Subscribe
The Federal Reserve’s first ever “stability report” warned of a number of dangers to the entire US financial system that could exacerbate problems if the system as a whole sustains significant stress.

The report, released Wednesday, illustrates a slew of vulnerabilities in the US financial system, including excessive asset valuations, historically high borrowing levels by US corporations and the increasing issuance of risky debt.

The report notes that while economic "shocks" are inherently unpredictable, vulnerabilities are known, systemic features. The authors define vulnerabilities as things that "build up over time and are the aspects of the financial system that are most expected to cause widespread problems in times of stress."

Geopolitical tensions, trade disputes and any other "adverse shocks could lead to a decline in investor appetite for risks in general… the resulting drop in asset prices might be particularly large, given that valuations appear elevated relative to historical levels," the report says.

Since stock prices have reached record highs over the past few years, they have a lot more room to fall, the report notes, stating that "elevated valuation pressures imply a greater possibility of outsized drops in asset prices."

The level of debt being carried by American firms and households makes them vulnerable in the event of a shock. If their incomes fall or assets they own sustain a dramatic price decrease, consumers and firms would likely cut back on spending "sharply," the report says, which would significantly impact economic activity.

While mortgage debt fueled the 2008 financial crisis, corporate debt has been isolated as a potential harbinger of the next one. The Washington Post called the pile-up of corporate debt the "mother of all bubbles." Instead of families and individuals taking out loans to buy homes they couldn't really afford — or were duped into thinking they could by unscrupulous retail brokers — this time around, analysts suggest that companies have been taking out loans in order to shuffle more cash to shareholders in the form of stock buybacks.

"The real biggest problem lies, if I'm looking at the US, I look at debt-to-cash ratios, and I take out the top 10 companies," economist Steve Blitz of TS Lombardo told CNBC in September. The top US companies, he said, in the tech and pharmaceutical sectors have more than enough reserves to service debt and so could be excluded from the analysis.

In the initial years of the post 2009-recovery, companies with high earnings and relatively low debt were doing the most borrowing. But over the past two years, this has changed. The companies taking out the most loans are the ones already in the most trouble. "Firms with high leverage, high interest-expense ratios and low earnings and cash holdings have been increasing their debt loads the most," the report says.

As of June, there was a record $6.3 trillion in corporate debt held by US firms, according to S&P. Companies held about $2.1 trillion on hand to service the monthly payments, but most of that cash is on the balance sheets of a handful of giant companies at the top of the market, according to a CNBC report.