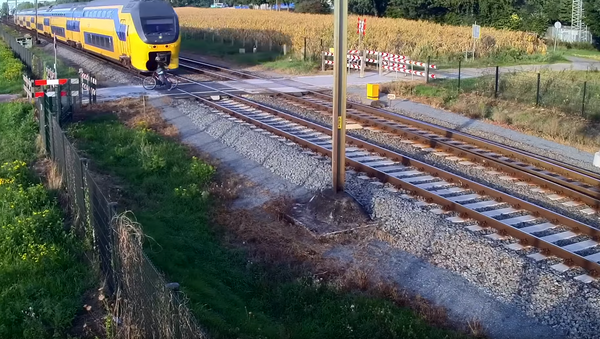 The Netherlands' ProRail, the country's national railway task agency, left netizens clutching their pearls and nationals rethinking railroad guards after footage surfaced of one bicyclist's blunder that nearly cost him his life.

Already approaching 800,000 views on YouTube in just four days, the clip shows an unidentified male cyclist waiting for a train to pass after approaching the tracks' level crossing. Though the man is aware of the first train that passes, his visual and auditory inattention to the second track cause him to foolishly pedal through and nearly become a double-decker train's ornament.

"As well as deaths, there are more than a hundred near-misses annually," ProRail's Geert Vlogman revealed in a Facebook post by the agency.

Despite three deaths at level crossings in the Netherlands this year alone, local residents have historically been in favor of keeping the high-risk barriers. Let's hope a change is on the horizon!

000000
Popular comments
Some persons there are walking blind and deaf !!! Maybe high ???