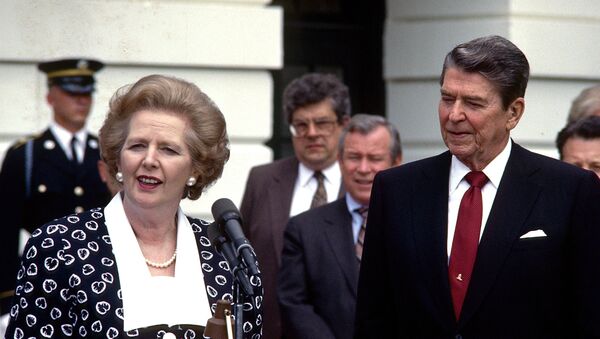 Eliminating the surprise of future threats to the United Kingdom could be better achieved if Britain took up where it left off in early 1990s, according to Lord Richards of Herstmonceux.

In a recent interview, the former UK Chief of the Defence Staff and professional head of the British Armed Forces argued Britain needs to be better prepared.

"Britain needs to rediscover the mentality that helped to win the Cold War if we are to deal effectively with emerging threats like Russia and Iran. All too often in recent years, Britain has found  itself being caught by surprise by the actions of hostile states, whether it is Russian acts of aggression in Crimea and Ukraine, or Iranian meddling in the affairs of pro-Western Arab countries, such as the Gulf states," Lord Richards alleged.

Both the British military and the government need to be properly informed in the light of the "rapidly changing threat environment," the former military chief suggested:

"Great power competition has returned and it is important UK strategy maximises the contribution that our world-class Armed Forces can make. I'm fully committed to ensuring the MOD plays its part in making a success of Global Britain."

His comments come as a new report by the London-based think tank Policy Exchange suggested creation of a new department at the Ministry of Defence.

NEW REPORT by ⁦@GElefteriu⁩: A Question of Power sets out the case for a new MoD Office of #NetAssessment, based on successful 45-year-old US model, to facilitate a restoration of British #strategy-making capacity #PXpatriotism https://t.co/IubW3mCG6Z

"A Question of Power: Towards Better UK Strategy Through Net Assessment" report stressed the need to "recalibrate our thinking" and establish an Office of Net Assessment, echoing the Pentagon model, which has fulfilled a similar role for the US military since the 1970s.

"There are Cold War-style military competitions underway both in Europe (US and allies vs Russia), Middle East (US and allies vs Iran) and Asia (US and allies vs China, and separately vs North Korea). They are all driven by the expansion of the conventional and unconventional (including nuclear) military capabilities of these rival nations, and different versions of US-led "containment" policies are now being put in place in each case," the report said.

It then stressed that the success of Global Britain could not be separated from the course of the global military competitions.

"Net assessment would be of particular use to the UK today in relation to the competitive challenge from Russia," the Policy Exchange paper suggested.

The idea was endorsed by the UK Defence Minister Gavin Williamson, who said the report was "a welcome contribution to the debate on the future of UK strategy-making."

My new @policy_exchange report setting out the case for a UK @DefenceHQ Office of Net Assessment on the US model, with an endorsement by the Defence Secretary, @GavinWilliamson, and a Foreword by former Chief of the Defence Staff, General Lord Richards. https://t.co/AtCt3AFMIm

Williamson has on several occasions in the past paraded the notion of the so-called "Russian threat," calling for steady and even increased defence spending by Britain as a NATO member state.

Britain's Defence Committee has also called for return to the mid-1990s level of spending on national defence and security. In its report "Beyond 2 per cent: A preliminary report on the Modernizing Defence Program" released in June this year, the lawmakers indicated that anything less than 3 percent of the GDP allocated for military spending is not an option for Britain.