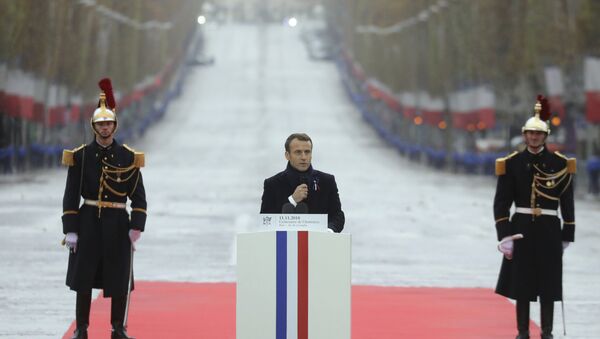 More than 287,000 people have taken part in protests over a rise in fuel prices. The demonstrations have been harshly condemned by French President Emmanuel Macron.

The yellow vests movement has stirred major demonstrations and unacceptable violence, according to Macron.

'First of all, I want to say that we will not change our views, we reaffirm our actions and beliefs… One cannot be pro-environment on Monday and then be against rising fuel prices on Tuesday… We must acknowledge the worries expressed by the public but there are also ecological concerns which should not be forgotten', Macron said at the Elysee Palace.

The AFP reported, citing the French president, that he hears the protesters, but won't scrap fuel taxes.

'What I've taken from these last few days is that we shouldn't change course, because it is the right one and necessary. But we need to change how we work because a number of our citizens feel this policy course is imposed on them from above', he said.

The French president also stressed that he was not confusing the rioters with citizens who went out to protest 'to convey a message'.

Large-scale demonstrations involving thousands of people began in France on November 17. The protesters have been blocking streets and fuel depots.

Meanwhile, French police reported that about 130 participants of the ongoing 'yellow vests' mass protests had been detained and dozens of people injured.

The finance minister noted that retail figures dropped by 35 percent on the first day of the protests and by 18 percent on November 24.