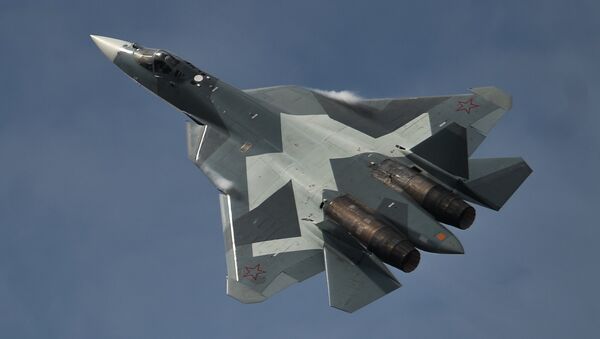 Ekaterina Blinova
All materialsWrite to the author
Despite the Russian Defence Ministry's clarifications, Western media are still racking their brain over the Su-57 fifth-generation jets' mission in Syria. Speaking to Sputnik, political observers of Syrian origin shed light on the message the Russian-made Su-57, S-300 and S-400 have sent to the US and Israel in the Arab Republic.

The Russian Su-57 fifth-generation stealth fighters have once again become the focus of special attention following the release of unique footage of the aircraft's mission in Syria and Zvezda TV channel's new video featuring a pair of Sukhoi Su-57 performing a synchronized landing.

Sputnik reached out to political observers of Syrian origin Ghassan Kadi and Christopher Assad, asking them to share their views on what message the much-discussed stealth aircraft sends to the US-led coalition in Syria.

The Su-57 Manoeuvres in Syria

On 1 March, 2018, the Russian Ministry of Defence (MoD) confirmed that the Su-57 jets had been tested in Syria, specifying that the mission had taken place in February 2018. Having noted that Su-57 crews had made over 10 sorties in Syria, the ministry elaborated that the mission was "carried out in order to prove announced possibilities of the newest aircraft in real combat environment."

On 19 November, the MoD released footage of the Su-57's manoeuvres in the Syrian Arab Republic, prompting a lively discussion in the American media.

The Drive magazine's Joseph Trevithick raised the question as to what other tasks the Su-57 crews conducted in the Arab Republic during their "absurdly short trip to Syria."

According to Kadi, besides accomplishing the tasks voiced by the MoD, the jets could go to Syria "to taunt the US radar system in Syria, and they succeeded in evading detection."

Russian Media Allegedly Leaks VIDEO of Su-57 Successor
He remarked that "this is the kind of news that the US is not prepared to divulge, and one that the Russian MoD does not need to publicize over and beyond the knowledge of the 'American partner'."

For his part, Christopher Assad, a Canada-based political observer and writer of Syrian origin, suggested that the stealth jets had sent a strong message to Israel in the first place.

"I consider it a message to Israel more so than the US or any of its coalition partners," he opined, referring to both the training and the release of the footage. "It simply means that, along with the S-300 and S-400 cover provided to Syria by Russia, Israel has been effectively locked out of its wish and ability to strike at Syria and Lebanon at will."

He presumed that "consequently, Israel's strategic goals of maintaining its illegal occupation of various lands by military force is now in doubt and have been put in permanent check."

According to Assad, "the prospects of a permanent and comprehensive peace between Syria and Israel have increased exponentially" due to Russia's involvement in the seven-year long civil war in the Arab Republic as well as to coordinated actions between Moscow, Damascus and Tehran.

Meanwhile, on 24 November, SANA news agency broke that rebels had fired shells loaded with chlorine gas at the al-Khalidiye neighbourhood in Aleppo. According to some estimates, between 74 and 107 were injured during the assault.

Aleppo Chemical Attack May Be Work of White Helmets - Russian MoD (PHOTO, VIDEO)
The chlorine attack was later confirmed by the Russian MoD. Earlier, the ministry's Centre for Syrian Reconciliation signalled that on Saturday evening that 120-millimeter shells had been fired at the north-western districts of Aleppo from the south-eastern part of the Idlib demilitarized zone controlled by Hayat Tahrir Al-Sham*.

In response to the shelling, Russian jets conducted air strikes on the terrorists. Turkey was warned about the strikes in advance via a hotline.

Commenting on the Idlib issue, Kadi pointed out that there is more to the situation than meets the eye.

"It is very easy to get bogged down trying to understand the situation in Idlib, especially with the huge number of terrorist organizations still operating," he said. "The simple answer to a seemingly very complex situation is this. Those organizations either belong to the Wahhabi school that is loyal to Saudi Arabia and the United Arab Emirates or the Muslim Brotherhood* school that is loyal to Turkey and Qatar."

Aleppo Governor Says Chlorine Attack Proves Militants Posess Chemical Weapons
According to the political analyst, both groups "have lost the fight for the control of Syria, but Wahhabis are bigger losers." He said that after the resounding defeat of the Wahhabi militia in East Ghouta and Daraa, the only a few pockets left in Syria with Wahhabi-linked rebels are in Idlib.

He presumed that Ankara had cracked down against the "Wahhabi camp" in Idlib and that the case of Saudi journalist Jamal Khashoggi killed in Istanbul is being used by the Turkish president to undermine the Saudi royal family.

"As for the battle of Idlib, it has the potential to put both Syria and Russia under scrutiny and false Western media reports and accusations of 'war crimes'," Kadi remarked in a reference to the previous media fuss around the Aleppo and East Ghouta operations. "It is one that all sides are trying to avoid, but if the battle indeed becomes avoidable and replaced by successful negotiations, the flip side is that Erdogan will end up with an ace card up his sleeve come negotiations." 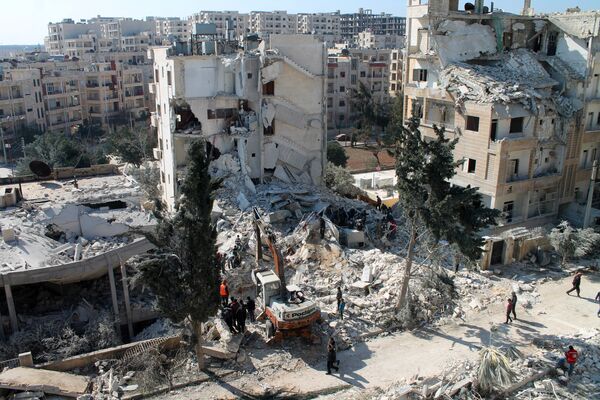 Christopher Assad shares a similar stance: "As for the agreement on Idlib, It is apparent that as long as the Turkish army's capacity to contain the terrorist organizations behind the demilitarized zone, Russia, Iran and Syria are willing to extend the date for Erdogan to implement the rest of the agreement."

Referring to the upcoming meeting of Russia, Turkey, Iran, and Syrian opposition which is due to take place on 28-29 November in Astana, Assad suggested that "it will result in the terror groups being stripped of their ability to exercise any political role inside Syria."

"With that gone and the military options of the groups disappearing, I do not see a need for a confrontation and the eventual disbanding of the groups would become a probability, subject to Syrian-Turkish negotiations under the auspices of Iran and Russia," he said.

It's Time for US to Leave Syria

'Negative Impact': Ankara Warns US not to Install Observation Points in Syria
However, the US military presence in Syria still poses a challenge to Damascus and the Russian-led coalition.

Colonel (ret.) Douglas Macgregor, US Army, wrote in his 23 November op-ed for The National Interest that it's time for Trump to withdraw from Syria. He warned against "recasting" US military operation in Syria as both containing Daesh (ISIS/ISIL)* and "contesting more actively Iran's activities particularly in Iraq, Syria and Yemen," as Trump's special envoy to Syria, Ambassador Jim Jeffrey, stated on 7 November.

According to Kadi, "military leaders can be more rational and pragmatic than politicians."

"In my view, even the American administration is aware of the fact that its presence in Syria is untenable in the long run. In more ways than one they may well want to withdraw and do that soonest possible, but they will not make that decision before they can secure a trade-off that guarantees a concurrent withdrawal of Iranian presence in Syria," the analyst explained.

Commenting on Macgregor's op-ed, Assad recalled that "it is not the first time the US military establishment has advised against a confrontation in Syria based on its own assessment of the probability to achieve any strategic goal." However, the observer highlighted that even reasonable recommendations do not always translate into policies.

"However, given the recent six months' positive developments in Syria, it looks more and more that the US is grasping at straws," Assad emphasised. "But as I have indicated in a previous analysis, the US may not be willing to withdraw before it gets some consolation prize, however small, at the negotiations table otherwise failing that, they would be forced to withdraw by local Syrian armed tribes opposed to their presence in that oil-rich region of Syria."