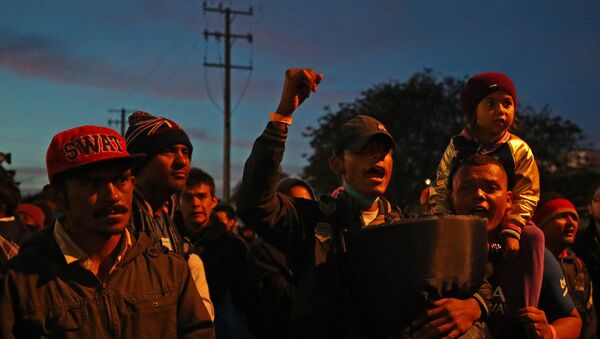 © REUTERS / Hannah McKay
Subscribe
International
India
Africa
The controversial issue of children of illegal migrants being separated from their families in the US rocked American society earlier this year, with many urging the White House to cease the practice. However, a closer look has revealed that some of these 'families' were fake, using the children as a means to enter the US.

The US Department of Homeland Security (DHS) revealed data on 27 November on the number of illegal migrants who pretended to be families with minors, apprehended at the US border. It turned out that there was a 110% increase between 19 April and 30 September, 2018 in the number of such 'fake families' appearing at the border and attempting to enter the country using underage children as a pretext.

The DHS has separated a total of 507 illegal migrants in 170 fake family units that appeared at the US border. 139 of them were children who were accompanied by total strangers, while 87 fake families were separated due to adults falsely pretending to be under-aged.

The department believes that the sharp increase in the number of fraudulent migrant families appearing at the US border is connected to the Flores v. Reno Settlement Agreement, which prevents illegal migrants' children from being detained for lengthy periods of time; instead, it stipulates that they should be released, often along with their parents, as they wait for their immigration cases to be processed.