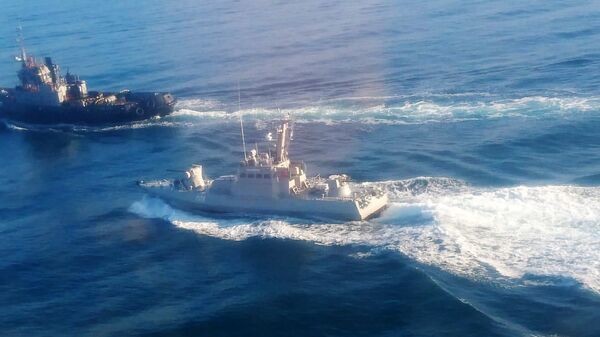 Sunday’s incident with Russian and Ukrainian ships in the Kerch Strait exacerbated even further what are already very tense relations between the two countries.

LIVE UPDATES: Kerch Strait Incident 'Very Dangerous Provocation' - Kremlin
President Poroshenko has signed a decree on imposing martial law in the country until 25 January 2019, and submitted it for approval by the parliament, the Verkhovna Rada, the presidential website announced.

"To enact the decision of the National Security and Defence Council of Ukraine dated 26 November 2018, On emergency measures to ensure the state sovereignty and independence of Ukraine and the imposition of martial law in Ukraine," the document said.

Poroshenko’s opponents say that this will invest him with virtually unlimited powers to outlaw political parties, allow the seizure of citizens’ property, replace civilian authorities with a military administration, and even become a dictator.

What Happened in the Kerch Strait

The Russian ships then opened fire, slightly wounding three Ukrainian sailors who were later taken to a hospital.

President Poroshenko, as Supreme Commander, convened a War  Cabinet composed of the prime minister, foreign and defence ministers, the heads of law enforcement agencies and the presidential administration.

Kiev Radicals Throw Smoke Flares at Russian Embassy Amid Kerch Strait Incident
The Cabinet recommended imposing martial law in the country and the issue was immediately submitted for consideration by the National Security and Defence Council (NSDC).

The Council agreed with Poroshenko’s proposal and the president signed the pertinent decree.

A 60-day special legal regime has been established with National Security and Defence Council Secretary Alexander Turchinov saying that martial law was necessary "to create conditions for repelling an armed aggression and ensuring national security”.

The Ukrainian Armed Forces and the units of the Security Service of Ukraine (SBU) have been placed on full alert.

Why Poroshenko had to reassure Ukrainians

Commenting on the situation, Petro Poroshenko admitted that Kiev was not considering any serious moves vis-à-vis Russia.

"The decision does not provide for immediate mobilisation, but we’ll be working with the first line of reservists," he said, adding that he had received hundreds of calls from those who want to come forward to ‘defend the country’.

He emphasised, however, that the emergency regime ‘does not mean a declaration of war’.

“It is introduced exclusively for the defence of Ukraine,” he later explained.

In the decree on the introduction of martial law published on Monday, Poroshenko also ordered the call up of reservists.

Kiev is counting on international support in its standoff with Moscow. “We appeal to the Budapest Memorandum partner countries, to the EU countries, to the participants of the Normandy format, in order to coordinate effective actions to protect Ukraine,” Poroshenko wrote on Twitter.

Ukraine’s Foreign Ministry described Sunday’s incident as ‘an armed provocation by Russia,’ and Foreign Minister Pavel Klimkin said he was ‘in close communication’ with foreign friends," namely his colleagues from the EU and Canada.

Russia
Russia Scrambles Warplanes as Ukrainian Navy Moves on Kerch Strait
Commenting on the situation, NATO spokeswoman Oana Lungescu emphasised that the North Atlantic Alliance is keeping a close eye on the developments in the Kerch Strait and is in constant contact with Kiev. She also appealed to the conflicting sides to show ‘restraint and de-escalation’.

The EU’s response was equally conciliatory and emphatically neutral. "The tensions in the Sea of Azov and Kerch Strait have increased dangerously today, after an incident this morning between Russian and Ukrainian naval vessels,” Brussels said in a statement.

Verkhovna Rada deputy Igor Lutsenko draws a clear line between the declaration of martial law and the upcoming presidential elections slated for next year: “The simplest explanation is that Pyotr Alekseyevich [Poroshenko] is considering the possibility of declaring martial law and cancelling elections”.

Parliamentary Vice-Speaker Oksana Syroyed believes that "nationwide martial law is a great opportunity to manipulate presidential elections and, if necessary, introduce a mini-dictatorship”.

The First Vice-Speaker of the Ukrainian parliament, Irina Gerashchenko, disagreed, however, saying that "martial law does not mean an automatic cancellation of elections”. She rejected claims that Poroshenko intends to cancel the elections or influence their outcome.

"Poroshenko is not afraid of elections," she wrote on the social network, calling the president the head of "a country at war".

In Moscow, Senator Franz Klintsevich said that there is highly likely that the martial law imposed by Kiev could be extended up to the presidential election and effectively cancel the upcoming vote.

His opinion was shared by the head of the Federation Council’s international affairs committee Konstantin Kosachev.

"Regarding the introduction of martial law in Ukraine, it is obvious that this is not a consequence, but a cause. It was with this possibility in mind that the whole provocation in the Sea of Azov was actually planned. For this, all the provocations in the Sea of Azov were started. They certainly hoped for something more to happen, but the Ukrainian authorities still want to gain as much as they possibly can from this pirate PR campaign,” he said.

According to a Moscow-based Ukrainian-affairs expert Eduard Popov, the situation in the Kerch Strait was created artificially and meets the interests of the President Poroshenko, who wants to postpone the upcoming elections.

“The conflict in the Sea of Azov was created literally from scratch, it’s an artificial conflict. Ukraine deliberately aggravated this to thwart the elections and postpone them indefinitely,” Popov noted.

Deputy director of the Institute of the CIS Vladimir Zharikhin agreed.

"If [Poroshenko] introduced [martial law] for two months, it means that the election deadlines should move accordingly. Therefore, Poroshenko is clearly looking for a reason to cancel or postpone the elections, given his low ratings", Zharikhin explained.