Hundreds of Sea Turtles Stunned by Cold Arrive on US Shores (PHOTO, VIDEO) 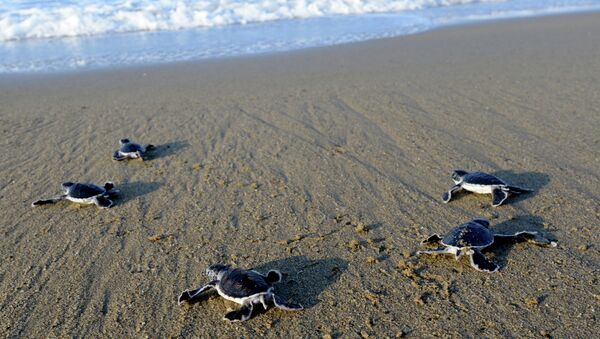 © AFP 2023 / SONNY TUMBELAKA
Subscribe
International
India
Africa
Hundreds of sea turtles have washed ashore in Cape Cod, Massachusetts, during the last week due to unseasonably cold temperatures, according to a Massachusetts wildlife sanctuary.

In an interview with The Cape Cod Times, Robert Prescott, director of Massachusetts Audubon Society's Wellfleet Bay Wildlife Sanctuary, revealed that all but one of the 82 sea turtles discovered on Thanksgiving were frozen dead due to the unusually cold temperatures this season.

Cold-stunning refers to a process by which the bodily systems of tropical reptiles in cold water begin to shut down because they're ectothermic, meaning they cannot regulate their own body temperatures. They are then pushed to shallower waters or the shore, where they freeze to death.

According to Jenette Kerr, the sanctuary's communications coordinator, 584 cold-stunned turtles had been recovered as of Monday morning. Out of the total number of turtles recovered, 244 were found dead.

"We are nearing 600 sea turtles since the cold-stun period began in October, about two weeks earlier than usual. This is likely to be our second busiest season ever. In 2014, more than 1,200 sea turtles cold-stunned on Cape Cod," Kerr told Sputnik Monday.

"It's generally believed that sea turtles have been expanding their ranges north because of the warming sea temperatures. They are feeding north of Cape Cod and in Cape Cod Bay during the summer. When they get signals to migrate south for the winter, some can't get out of the bay because Cape Cod is shaped like a hook. They're just stuck as the waters continue to cool. Their body temperatures fall and they gradually become immobilized and no longer can swim," Kerr noted.

The majority of the turtles found have been Kemp's ridleys, the rarest species of sea turtle and one of the most critically endangered. In addition, nine loggerheads were recovered, with one weighing around 300 pounds. Some of the living turtles have been sent to the New England Aquarium's Animal Care Facility for rehabilitation.

"Strong winds can push them ashore, where our volunteers and staff have a chance to retrieve them and transport them to the New England Aquarium for medical care and rehabilitation. It's a lot of effort by a lot of people to help these critically endangered species (most of the turtles that strand are Kemp's ridleys, the smallest sea turtle in the world and the most endangered)," Kerr added.