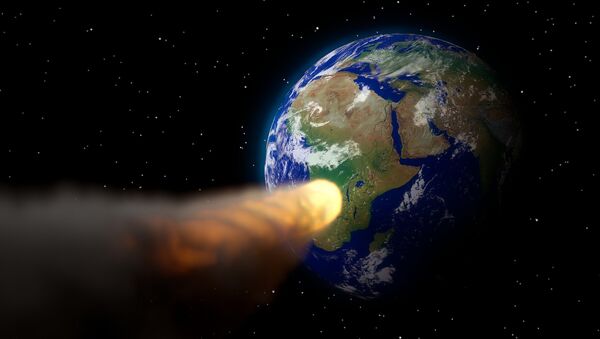 A large asteroid that could someday be headed directly for Earth would pack a tremendous impact force 1,500 times that of the Hiroshima and Nagasaki atomic bombs combined, the newspaper Express warned.

The British daily cites NASA sources as claiming that the space rock, measuring nearly 700 feet across, could have a staggering 62 different potential impact trajectories with Earth with each of them potentially able to set the asteroid on a collision course with us over the next 100 years.

NASA Asteroid Mission Sampling Arm Tests Okay Ahead of Bennu Arrival
According to NASA’s Jet Propulsion Laboratory (JPL), asteroid 2018 LF16 was last spotted on 16 June with calculations showing that the space boulder could smash into our planet sometime before 2117.

Even worse, the asteroid is currently hurtling through space at a speed of over 33,844 miles an hour.

“A space rock this big is about twice as tall as Big Ben’s clock tower in London, twice the height of the Statue of Liberty in New York, and is four times as tall as Nelson’s Column in Trafalgar Square,” the Express wrote.

This does not necessarily mean, however, that asteroid 2018 LF16 is 100 percent sure to slam into Earth. NASA experts estimate that the asteroid has a one in 30 million chance of crashing into our planet and has a 99.9999967 percent chance of missing us in the event it does wander too close to home.

An asteroid this big would pack a tremendous impact force equal to that of the 57-megaton Tsar Bomb the Soviet Union exploded in 1961.

“That is more than 1,500 times that of the Hiroshima and Nagasaki bombs combined, and 10 times more powerful than all the munitions expended during World War II,” the BBC wrote.

Luckily for mankind, asteroids rarely wander close to Earth, with the European Space Agency saying that asteroids larger than 330 feet in diameter usually cross paths with Earth only once every 1,000 years.