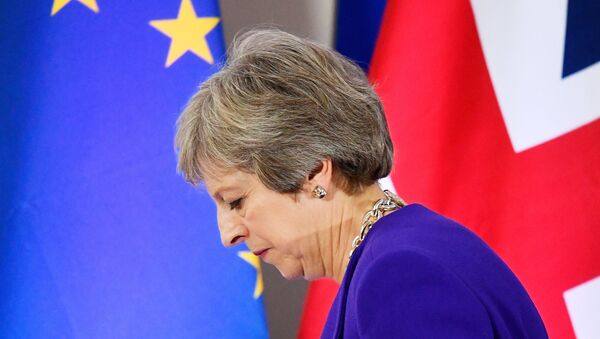 With the parliamentary vote on Theresa May’s Brexit agreement just around the corner, keen Remainers are keeping their eyes peeled for any and all evidence that throws the Brexit project further into question - they may have just been handed it.

Theresa May's Brexit deal could cost the UK economy a whopping £100 billion ($128.3 billion) by 2030, according to a new report by the National Institute of Economic and Social Research (NIESR).

The Report, titled ‘The Economic Effects of the Government's proposed Brexit Deal,' argues that the total value of Britain's economy would shrink by roughly 3.9% by 2030 compared with the country's economic trajectory were it to remain in the EU.

The authors warn that "this is the equivalent of losing the economic output of Wales or the City of London."

This is a very startling chart from @NIESRorg study on #Brexit deal impact. (I have checked directly with the authors as the numbers looked so crazy bad but, no, you did not misread that.

​The findings, which are likely to embolden pro-EU remainders who argue that the UK is economically better off in the EU, comes a matter of weeks before members of parliament will be required to vote on Prime Minister May's Brexit agreement, which was given the stamp of approval by EU leaders on Sunday November 25, 2018. The vote is slated for December 12.

The withdrawal bill lays out the terms of the UK's departure from the EU. This includes London having to pay a so-called ‘divorce bill' of £39 billion, preserves the rights of EU citizens living in the UK and vice versa, as well as a Northern Ireland ‘backstop,' which keeps the Irish border open in the event that bilateral trade talks fail between Brussels and London.

I suspect this will be the first of many dire economic assessments of the #Brexit "deal". This suggest the UK will be £100 Billion poorer each year. This is a bad deal. No-one in their right mind should support it. https://t.co/zd6jg3gRSb

​Yet, NIESR's report grimly forecasts that Miss May's plan will leave Britain vulnerable to a raft of new trade barriers. Moreover, they say that under the current deal, bilateral trade between the UK and EU will plunge by a staggering 46% by 2030.

"Our key finding is that if the Government's proposed Brexit deal is implemented so that the UK leaves the EU Customs Union and Single Market in 2021, then by 2030 GDP will be around 4 per cent lower than it would have been had the UK stayed in the EU," the think tank says.

🇬🇧: "Brexit deal is even worse than staying in the EU!"

🇪🇺: "That´s what we´re telling you since two years."#Brexit

​"This is largely because higher impediments to services trade make it less attractive to sell services from the UK. This discourages investment in the UK and ultimately means that UK workers are less productive than they would have been if the UK had stayed in the EU."

Despite the report's stark and doom-laden warnings, Eurosceptics are likely to raise an eyebrow of mistrust, considering that it was carried out on behalf of the so-called ‘people's vote campaign,' which explicitly calls for a public vote on the terms of any final Brexit deal.

In one tweet: #brexit means OUT of the institutions but IN the legal framework. It is the U.K. going from rule-maker to rule-taker. This is NOT taking back control. This is NOT better than membership. This is NOT worth it 🇬🇧

​Yet, that hasn't stopped some pro-EU MPs from pointing to the report as qualifying evidence that the UK must hold a second vote on Miss May's agreement.

Among others, Labour MP for Wolverhampton South East, Pat McFadden, has been quoted as saying that the report "shows the reality of this deal" and that it will "leave Britain tens of billions of pounds poorer than if we stuck with the deal we've got."

"That should be the real choice offered to the British people now," he reportedly added.

So #Brexit is going to cost UK £100bn by 2030, this is the real Brexit dividend Theresa May won't tell us, austerity in perpetuity, there is no good #BrexitDeal, but hey it won't impact on her or the billionaires that fund her and her rancid party, ffs #StopBrexit #FinalSay