US Christian Fundamentalists At It Again, This Time With Taxpayer Support 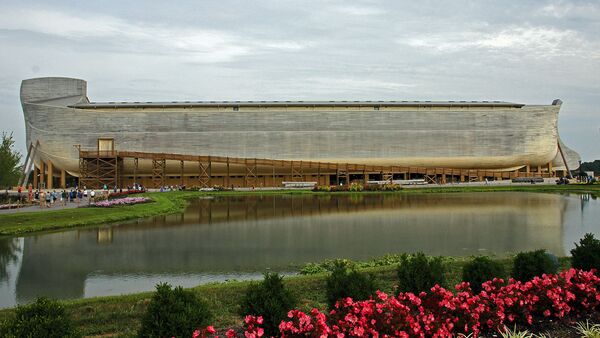 A tourist attraction aimed to convince people that the Christian Bible is factual to the letter is highly discriminatory on who it employs and was built with government money, according to detractors.

‘Answers in Genesis,' a fundamentalist evangelical Christian group from Kentucky has constructed a replica of Noah's Ark to prove that everything said in the Bible's Old Testament is true. The 155-meter vessel is made of wood in Northern Kentucky, just south of Cincinnati, Ohio, and is far from any sea or ocean.

According to Haaretz, Kentucky is accessible to 2/3 of US population in less than a day of driving, convenient for maximizing profits.

The vessel has no windows and the builders have taken certain liberties with the ship's parameters, since the Old Testament does not describe Noah's ark in great detail. For example, literally no information is given on how the ship interior was designed.

Bible Revisited: Alleged Sodom Site Thought to Have Been Hit by Cosmic Blast
The ship is exhibited in a theme park called Ark Encounter, the total cost of the park, complete with the ship was some $120 million, according to Haaretz.

The aim of the project is to "convince visitors that the world was created less than 6,000 years ago, that Noah was 600 years old when the flood took place, that he spent 70 years building the ark and that 6,744 animals belonging to 1,398 species were on the vessel," Haaretz reports. According to the report, the founders got these precise numbers after performing calculations using information contained in the Book of Genesis.

It is unclear how the founders aim to prove their point, as it clearly took much less than 70 years to construct the replica, finished two years ago. The exhibition inside the vessel includes animatronic interactive figures of every animal believed to have been saved by Noah, including, well, dinosaurs.

​According to the proprietors of Ark Encounter, dinosaurs lived on Earth less than 6,000 years ago, along with people.

However, there are problems with the project besides mere matters of science/religion debate. According to Tri-State Freethinkers, a Kentucky atheist organization, the entire project is riddled with controversy.

Catholic UK MPs Angry at No Asylum Offer for Christian Woman Held in Pakistan
First, they point out that it is inappropriate to build a theme park around a tale of genocide, murder and incest.

"It is not a cute story, it is a horrible story. This is a story of genocide and incest. God killed everybody," says Jim Hunt from the Freethinkers. "What is amusing about that?"

There are more down-to-earth problems, too. The Freethinkers point out that Answers in Genesis used state funding to establish the park, in addition to personal investments by the founders and a loan from an unnamed financial institution. According to the Freethinkers, the government is financing the promotion of religious belief.

The Glice Rink at the Ark @ArkEncounter was very popular last night as record crowds for this date (nov 23) poured into both the Ark Encounter & Creation Museum @CreationMuseum for the spectacular ChristmasTime & ChristmasTown programs. Details: https://t.co/BYw9Ni4CTG pic.twitter.com/X9qAq3oaTt

​Proponents of the project say government funding was used to create jobs, but if you want to apply for a job at Ark Encounter, you must first sign a declaration saying that you believe in Christianity and a Christian God's creation of the world.

Single employees must vow to not have sex before marriage and applicants must pledge that they are not LGBT, according to Haaretz.

The Freethinkers have a record of acting against racial discrimination, racists like the Ku Klux Klan and are in support of legal abortions, the rights of LGBT people and voluntary euthanasia (aka ‘the right to die with dignity'). So far, the group has staged demonstrations near the Ark replica since the day it opened, Haaretz reports. although it is not known whether the group plans on legal action.