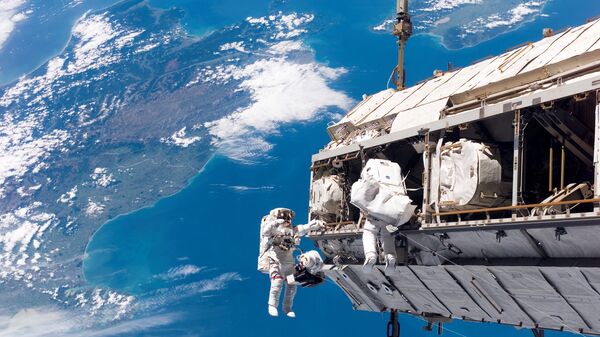 © NASA . handout
Subscribe
International
India
Africa
Arguably one of the greatest scientific collaborations in the history of mankind - and certainly the most expensive - the International Space Station (ISS) has been orbiting the Earth for 20 years, bringing science and amazement to Earthbound scientists, researchers and space enthusiasts.

In honor of the milestone, the European Space Agency has released a supercut hi-def video for the enjoyment of all.​​​​

​The first ISS component was launched November 20, 1998, and the entire structure today boasts almost a million tons of mass, spreading itself out in low Earth orbit at dimensions comprising some 239 by 356 feet.

ISS has been continuously inhabited by cosmonauts and astronauts since November 2000, including spacefarers from the US (51), Russia (39), Japan (6), Italy (3), Germany (3) as well as two apiece from Canada and France, and one each from Belgium, the Netherlands and the UK.

The above figures do not include the 118 short-term visitors to the orbital research platform.