Campaign 'Heart and Soul': UK PM May Calls on Britons to Support Her Brexit Deal 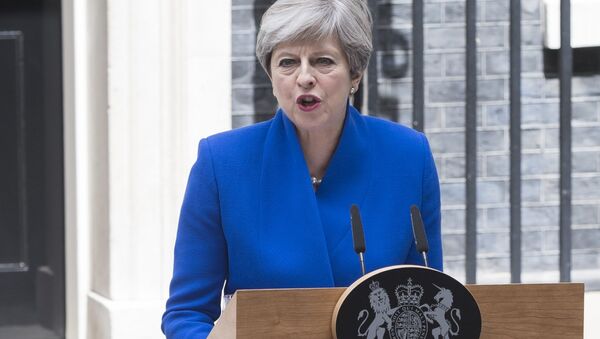 On Sunday, the 27 leaders of the remaining EU nations are expected to endorse the draft Brexit deal, including the withdrawal agreement and the declaration on the future EU-UK relations.

UK Prime Minister Theresa May said in an open letter to the nation that she would campaign "heart and soul" to get her deal through the parliament, even amid a stiff opposition within and beyond her own party.

"Today, I am in Brussels with a firm intention of agreeing a Brexit deal with the leaders of the other 27 EU nations. It will be a deal that is in our national interest – one that works for our whole country and all of our people, whether you voted "Leave" or "Remain," May said in the letter.

The prime minister recalled that on March 29 of the following year, the United Kingdom will leave the EU. "We will then begin a new chapter of our national life," she added.

Boris Johnson Reveals How UK Should Prepare for 'No-Deal' Brexit
On Thursday, May again defended a draft Brexit deal in the UK Parliament's House of Commons. The agreement has faced criticism both from the opposition and from the ruling party, with several members of her Cabinet resigning over their disagreement with the deal.

In particular, the UK Democratic Unionist Party (DUP) insists that the country's government should renegotiate the Brexit withdrawal deal, saying that the rejection of the existing text does not necessarily lead to a no-deal scenario and implies further work on the agreement.

The DUP's support is extremely important for May, since the Tories can ensure the majority in the parliament only in coalition with the unionists. A parliamentary majority, in turn, would enable May to push the deal through even if other parties oppose it.

Meanwhile, President of the European Parliament, Antonio Tajani, said Saturday that the EU and the United Kingdom should continue to work together in the interests of European citizens.

'Tempest in a Teapot': EU Lawmakers Say Gibraltar Brexit Issue Overrated
"I just met British Prime Minister Theresa May ahead of the meeting of heads of state and government tomorrow in Brussels. We must continue to work together in the interests of all European citizens," Tajani said on Facebook.

The meeting of 27 leaders will begin at 9.30 (8.30 GMT) on Sunday with an exchange of views. It will be followed by a working session of 27 EU countries to approve an agreement on the conditions for the withdrawal of the United Kingdom from the bloc and the adoption of a political declaration on the structure of their future relations. After that, leaders are scheduled to meet with May to jointly consider next steps.

Last week, London and Brussels completed their draft agreement on Brexit after over a year of negotiation.

The United Kingdom voted to leave the European Union in a referendum in June 2016, with almost 52 percent of those who voted supporting the move. The country is expected to withdraw from the bloc in late March 2019 despite a number of stumbling blocks that impede talks, namely, the Irish border, customs union, the Gibraltar issue and post-Brexit UK-EU economic relations.