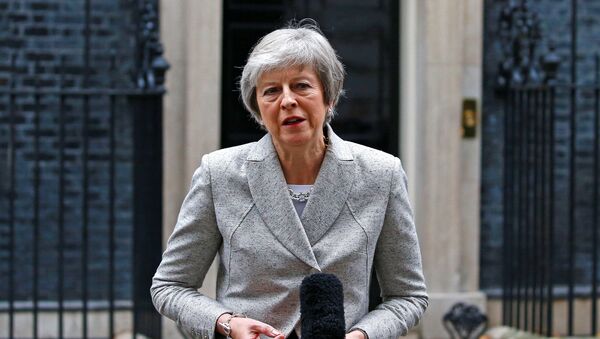 Earlier this week, British Prime Minister Theresa May announced that the text of the declaration on future relations has been agreed upon between the UK and the EU. She added that the agreement was clinched with the European Commission, and it was up to the EU 27 to review it in the run-up to the special EU Council meeting on November 25.

British Prime Minister Theresa May will visit Brussels for Brexit talks later on Saturday as the UK and the EU seek to finalize a deal on Britain's withdrawal from the bloc just in time for Sunday's summit of European leaders.

The BBC cited Downing Street sources as saying that they expected a solution before Sunday's gathering.

No 'Major Problems' Ahead of Sunday Summit — London

The sources pointed out that May making an unscheduled trip to Brussels did not indicate "major problems" pertaining to the Brexit deal on the UK's future relations with the EU. The 585-page document specifically covers citizens' rights, financial issues and the Irish border.

The latest draft of the document is known as the political declaration which has already been published and is due to be considered by EU member states.

May's visit to Brussels comes after her meeting with European Commission President Jean-Claude Juncker, during which she made it clear that the Brussels talks may continue until the eve of Sunday's summit.

"We've made further progress and as a result we have given sufficient direction to our negotiators, I hope, for them to resolve the remaining issues, and that work will start immediately. I now plan to return for further meetings on Saturday to discuss how we can bring to a conclusion this process and bring it to a conclusion in the interests of all our people," she underscored.

May also expressed confidence that the draft Brexit deal would be approved by the European Council on Sunday and will apply to the entire UK, including the overseas territory of Gibraltar.

Spain, in turn, threatened to vote down the proposed deal, objecting to the wording of Article 184, which says the EU and the UK will seek to "negotiate rapidly the agreements governing their future relationship" between March 29, 2019 and December 2020.

The Spanish government insisted that the deal is not clear on whether it covers the status of Gibraltar, a British overseas territory that's long been a bone of contention between London and Madrid.

The Guardian, meanwhile, reported in that the UK Prime Minister may grapple with "real hard work" after she returns from Brussels, given that 85 of the Conservative Party's 315 MPs have publicly rejected the Brexit agreement.

She will have to win back dozens of her own MPs to get the agreement through parliament," according to the newspaper.

READ MORE: Analyst on Brexit Situation: Only Reason We're in This Mess Is Because of May

'Capitulation': Britons Don't Trust Theresa May in Brexit Deal - UK Politician
Earlier, May downplayed the idea of no Brexit, saying that "the government needs to deliver on what people voted for in the [Brexit] referendum in 2016."

For his part, Dominic Raab, who resigned as Brexit secretary in a show of protest against the withdrawal agreement, remained downbeat about the Brexit deal.

"Well, I'm not going to advocate staying in the EU but if you just presented me terms, this deal or EU membership, we'd effectively be bound by the same rules without a control or voice over them, [so] yes, I think this would be even worse than that," he noted.

READ MORE: Under Pressure: May Defends Brexit Deal in House of Commons Amid Tories Revolt

Earlier this week, German Chancellor Angela Merkel, who will not attend the Sunday summit, said she hoped for a positive outcome of EU27 negotiations and for a solution to the Gibraltar disagreement before the November 25 deadline.

European Council President Donald Tusk, for his part, confirmed that the deal had been struck in principle ahead of the Sunday gathering.