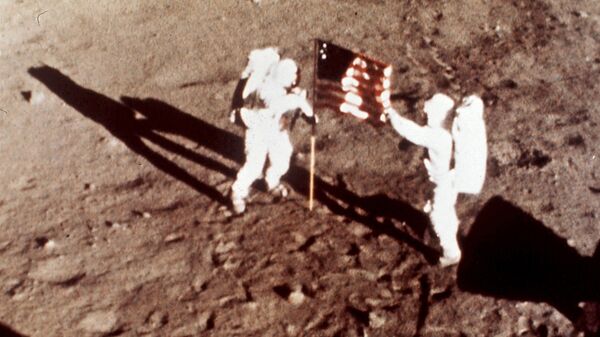 © AP Photo / NASA
Subscribe
International
India
Africa
While it is widely believed that the 1969 Apollo 11 mission did successfully deliver the first people to the Moon, many still claim that the famous moon landing was faked. The Apollo program marked perhaps the biggest triumph for the US in the Space Race with the USSR.

Dmitry Rogozin, the head of Russian national space agency Roscosmos, has offered to "check" whether the American moon landing program was not a hoax.

Speaking with Moldovan President Igor Dodon about the prospects of a moon base, Rogozin suggested that no country can bear the burden of a costly moon program alone.

When asked if American astronauts landed on the moon, Rogozin replied with a smile, "We have set a task to fly and see whether they were [on the Moon] or not."

This week, Roscosmos announced that it would pen a new, multibillion-rouble Moon exploration programme, which will see Russia send its first manned mission to the Moon after 2030. Roscosmos also said on Monday that it would work together with NASA on the concept of a lunar orbital station.

Earlier in November, Dmitry Rogozin said that Russia is mulling the creation of a long-term man-visited base on the Earth's natural satellite and study it with the help of robot avatars.

The Apollo moon landing program, which delivered American astronauts on the Moon in 1969, has ignited plenty of conspiracy theories, which claim that the photos, videos, and other material regarding the expedition were falsified by NASA.

According to a June poll, nearly 57 percent of Russians believe that the "giant leap for mankind" was faked.

In the UK, a 2016 poll showed that some 52 percent of Brits believed the landings never took place. According to a 2013 Pew Research Center survey, 7 percent of Americans doubt that their compatriots walked the Moon.