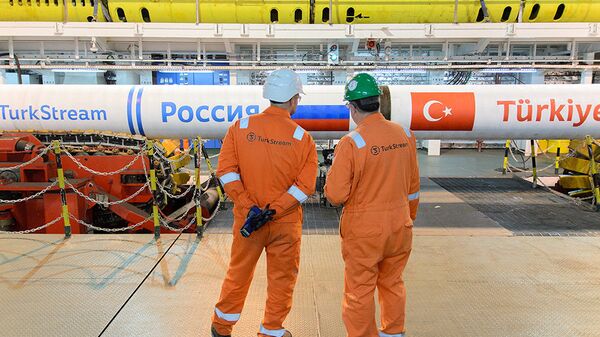 © Photo : turkstream.info
Subscribe
International
India
Africa
Earlier this week, Kommersant daily cited sources as saying that the Russian gas giant Gazprom announced plans to extend the Turkish Stream pipeline to Bulgaria, then Serbia, Hungary and Slovakia. The Bulgarian and Serbian routes are expected to be put in operation in 2020, followed by Hungary in 2021 and Slovakia in mid-2022.

Bulgaria's readiness to add to the implementation of the Turkish Stream gas pipeline project on its territory may have an impact on the project-related interests of a number of Western European countries, especially Austria, contributor Dmitry Lekukh argued in his article for Sputnik.

He suggested that "Austria may play a key role [in the project] when it becomes the end point of the European part of Turkish Stream in the town of Baumgarten and closes the so-called European gas ring."

In this vein, Lekukh recalled that the Austrian energy company OMV had indicated its intent to take part in the construction of the second leg of Turkish Stream so as to extend the pipeline to the Baumgarten hub.

"This is a logical step, given that Austria is the place where the northern and southern corridors of Russian gas transportation merge, and where  'reverse' in all directions of a single 'gas ring' is possible in difficult political and/or technological situations," Lekukh pointed out.

Secondly, Austria and Germany possess voluminous, well-equipped underground gas storage facilities (UGSF) which can be used as an alternative to much-hyped Ukrainian UGSFs, he says.

Lekukh recalled in this context that "earlier, many 'democratic experts' assured us that Russian gas exports to Europe are risky and practically impossible without Ukrainian UGSFs", a technological problem which he noted can now be sidestepped "with a sort of geographical grace."

"With that, Bulgaria officially admits that it intends to use part of the existing infrastructure in reverse mode for gas transportation as Austria, Hungary, Serbia and Slovakia line up for Turkish Stream gas," Lekukh wrote.

He recalled that Gazprom used a similar capacity reservation scheme in Germany, the Czech Republic and Slovakia when dealing with onshore construction of the Nord Stream 2 gas pipeline.

In this regard, the December 7 visit to Moscow by Greek Prime Minister Alexis Tsipras, who plans to uphold Turkish Stream's "Greek route", can already be seen as irrelevant, given Moscow's pragmatic approach, according to Lekukh.

"In addition, the "Bulgarian version" of the gas route provides energy security guarantees for small countries in Eastern Europe that are now using gas transits through the dilapidated gas transmission system of Ukraine," he concluded.

World
How the New US Sanctions Can Hit the Turkish Stream Project
The Turkish Stream gas pipeline project consists of two lines with a total capacity of 31.5 billion cubic meters per annum. The first one, with a capacity of 15.75 billion cubic meters, will deliver Russian hydrocarbons directly to Turkey. The second one is intended to provide European states with Russian natural gas.

In May 2018 Sofia signalled its keen interest in Turkish Stream, with Bulgarian President Rumen Radev proposing the construction of a direct pipeline from Russia to Bulgaria.

The views and opinions expressed by Dmitry Lekukh are those of the contributor and do not necessarily reflect those of Sputnik.