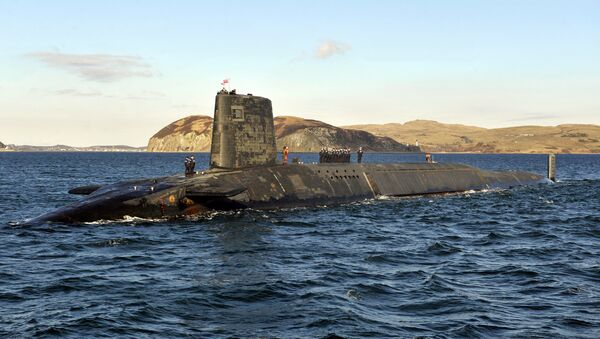 "The admission by Defence Minister Stuart Andrew of the inordinate number of safety issues at the Faslane submarine base in Scotland should be a wakeup call to all British citizens just as the alarming number of incidents with the US nuclear arsenal in recent years should be for Americans," Dr. Peter Kuznick, director of the Nuclear Studies Institute at American University in Washington, told Sputnik.

Dr Kuznik's comment has come on the heels of Defence Procurement Minister Stuart Andrew's report on safety incidents at the British naval base since 2006 which was released at the request from Edinburgh SNP MP Deidre Brock.

According to Andrew's letter, almost 505 events were recorded at Her Majesty's Naval Base (HMNB) Clyde at Faslane over the past 12 years. The minister specified that "events" could include "near-misses, equipment failures, human error or procedural failings."

"They are raised, however minor they may appear, to encourage a comprehensive, robust reporting culture, undertake learning from experience and to take early corrective action," Andrew asserted.

There's Opposition to Nukes' Presence in Scotland - Activist
He highlighted that only two "category A" incidents had taken place from 2006 and 2007, and provided detailed descriptive information of the issues.

"Given that the safety significance of all reported events has remained very low, it is worth highlighting that in neither event was any radiological contamination evident," the minister underscored.

However, the situation is not as rosy as it looks, the academic pointed out.

"The number 505 over 12 years has been bandied about, but if we look more closely at the report, it includes 259 safety incidents on Trident submarines based at Faslane and 246 on other nuclear-power but conventionally armed hunter-killer submarines," Dr Kuznik said.

The professor emphasised that of the aforementioned incidents, "23 had 'high potential' for releasing radioactive elements" which is "much more dangerous than the two 'category A' incidents being widely reported that posed a potentially much more serious health and contamination risk, but one that was fortunately averted."

There is yet another alarming signal, according to the academic, namely the growing number of the "events."

"Also alarming is the fact that the problem has only grown in recent years, as 2016 and 2017 saw a combined 153 such incidents," Dr Kuznik stressed. "So instead of getting safer, the situation has only gotten more dangerous. Andrew has downplayed the risk to the public, but as long as these weapons are maintained the danger of a more serious and potentially catastrophic accident remains."

US Trident, B61 Nuclear Weapons Upgrade Costs Soar Up to $11Bln
Given this, "it is no surprise that the government was in no hurry to make this information available," he opined.

"The public may soon realize that the risks involved in maintaining Britain's nuclear arsenal heavily outweigh any perceived security advantages that Britain might gain. I just hope that until that realization is reached, far more attention will be placed on safety concerns. We may not be so lucky the next time this happens," the professor concluded.

HMNB Clyde is one of three UK Royal Navy bases. Headquartered in Scotland, the base houses British submarines armed with Trident nuclear missiles. Speaking to Sputnik on November 21, Arthur West, chair of the Scottish Campaign for Nuclear Disarmament, highlighted that there are many who are against the deployment of nuclear weapons in Scotland.

"You know, in Scotland there's substantial opposition, you know, is the majority of politicians in Scotland that are opposed to the nuclear weapons being in Scotland, public opinion as verified by many opinion polls showing that as well," the activist said, bemoaning a lack of transparency with regard to the British atomic arsenal.