'Guess US is the Enemy Now': Reactions to Trump Head on French Election Posters 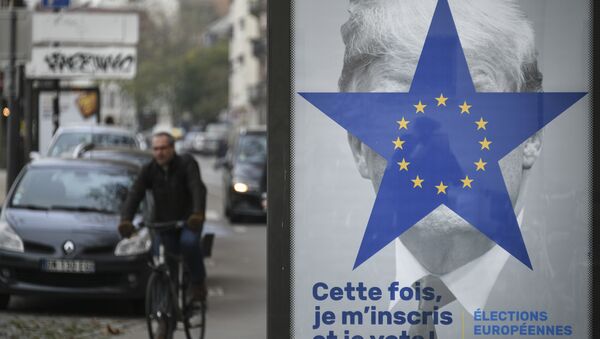 "This time I will register and I will vote" read the posters put up this week in Strasbourg and aimed at encouraging the French electorate to go to polls next spring.

A blue European Union flag shaped as a star, covering the face of the US president Donald Trump, is also featured on the posters, appealing to political activism in French voters.

The next elections to the European Parliament are expected to be held May 23-26, 2019, in which EU citizens will elect Members of the EP to represent them in Brussels and Strasbourg — the two cities hosting the EP plenary sessions.

Jean-Francois Lanneluc, the head of communications for Strasbourg, explained why Mr. Trump was used in a bid to motivate French citizens to take to the polls.

"When you launch a campaign you want it to be noticed, there has to be an element of surprise. Here, you have that and it has not gone unnoticed. It has prompted debate and that's good," Lanneluc said.

Users online have reacted to the new ads for the EP election.

@ckchumley I guess that the United States is the enemy now.

Ooof merde. France 🇫🇷 is so worried their own pols are lacking, they need to rely on strong leaders from other countries?
History repeats. 😂

A historically low turnout was registered at the 2014 EP elections, with around 42% turning up at polling stations in the whole of the European Union and a slightly bigger number — 42% — in France.

"Europe remains a sort of model against the temptation of isolationism, which Trump embodies. We stand behind the message; we evaluated the risks," Lanneluc said.

The move of some EU member states towards strengthened sovereignty and control of national borders has long been a thorn in the side of the bloc's Europhiles, advocating greater unity within the bloc.

READ MORE: ‘EU Won't Make Any Difference as Long as There are National Divisions' — Prof