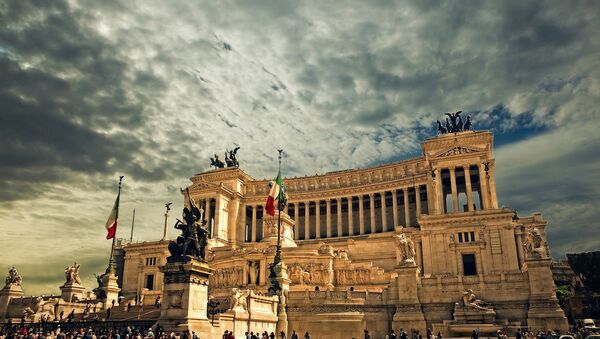 © Photo : Pixabay
Subscribe
International
India
Africa
ST. PETERSBURG (Sputnik) - Brussels is unlikely to impose sanctions on Italy over its draft budget, rejected for the second time by the European Commission, a secretary for the right-wing Lega party, Grimoldi, told Sputnik on Friday.

"Which sanctions or fines are we talking about? The procedures of imposing them are extremely long and Brussels at this point is not sure what fines should be placed on our country," Paolo Grimoldi, a secretary for the right-wing Lega party in the northern Italian region of Lombardy said.

The Italian politician emphasized that the Italian government had no plans to make any adjustments to the document and stressed that Rome could re-evaluate the country's yearly contributions to the EU institutions over the budget standoff.

"We lose every year 5-6 billion of euros in yearly contributions to the European Union. I am paying the lawyer to protect me and to help me. No one will pay for the lawyer who files a lawsuit against him every day. We may reconsider our contributions amid these developments," Grimoldi said.

Another Lega's member, who serves as a head of the delegation, Mara Bizzotto, also commented on the situation with Italy's budget stressing that Rome will not bend under the dictate of Brussels and will defend its right to a budget that focuses on the country's economic growth.

"We will not suffer the dictatorship of the spread and the banks orchestrated by Brussels and high finance," Bizzotto said.

She stressed that Lega would advocate the interests of the Italian people, who are demanding jobs, security and investments.

"The Italian people have voted and have chosen a government of change to revolutionize the Soviet European Union that in recent years, with its diktats and its failed austerity policies, has brought our country to its knees," the parliamentarian said.

Italy and the European Union are currently at odds over the country's draft 2019 budget. Earlier this week, European Commissioner for Economic and Financial Affairs Pierre Moscovici warned Italy that its refusal to change the draft budget warranted an excessive debt procedure, which could lead to fines. Reacting to this statement, Italian Prime Minister Giuseppe Conte said Thursday his government would not change the budget plan.

The European Commission, on its part, has criticized Italy's budget, with its deficit projected to reach 2.4 percent of the gross domestic product, over high public spending, while Rome has defended its right to invest in growth.

A Lot of Italy’s Bad Debt Would Pile Onto Northern European Tax Payers - Analyst
Italy's debt has reached around 131 percent of its GDP, the second highest in the European Union. According to the European Commission, Rome's draft budget will not help the country move toward reducing its debt load, which is one of the key rules for countries with debt higher than 60 percent of their GDP.

Once the EDP has been launched, a member state has between three and six months to comply with the requirements of Brussels. The commission then reviews the progress made, and if it believes that nothing has been done the council will set new targets. The member state is then given another three to six months to correct its behaviour. If the action has been taken, but the set targets have not been met, Brussels may give new recommendations and another deadline to comply.

READ MORE: Italy's Not Prepared to Change Budget Before EP Elections in May — Consultant

If a country has failed to take action, it may be fined 0.2 percent of its GDP or have EU assistance temporary suspended.

The whole process may go on for months or years, with steps repeated again and again, until the EU authorities are satisfied. In 2018, the European Commission recommended closing the EDP procedure against France that started in 2009.

Views and opinions expressed in this article are those of Paolo Grimoldi and do not necessarily reflect those of Sputnik.