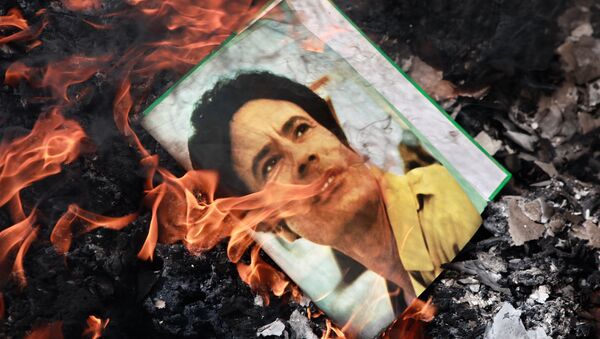 © Sputnik / Andrey Stenin
/
Go to the mediabank
Subscribe
International
India
Africa
Former Secretary of State Hillary Clinton has repeatedly stood by her role in the 2011 intervention in Libya, which divided the country in two and opened the "gates of Europe" to migrants fleeing poverty and conflict. Now that she's urging the EU to curb migration to prevent the rise of right-wing politicians, critics are accusing her of hypocrisy.

Hillary Clinton has called on the nations of Europe to curtail immigration to stem the tide of right-wing sentiment on the continent.

In an interview with The Guardian, the 2016 Democratic presidential candidate suggested that "Europe needs to get a handle on migration because that is what lit the flame." Clinton drew attention to the "rise of populists, particularly on the right, in Europe and the Americas."

She suggested that politicians like Angela Merkel, the architect of Europe's open-door immigration policy, were "very generous and compassionate", but insisted that the EU must clamp down on support for refugees because "if we don't deal with the migration issue it will continue to roil the body politic."

The former Democratic presidential candidate, who lost the 2016 vote to Donald Trump, accused him of campaigning on the immigration issue to score political points. She maintained the Democratic Party's narrative of Donald Trump "colluding" with Russia and violating the freedom of press. "The use of immigrants as a political device and as a symbol of government gone wrong, of attacks on one's heritage, one's identity, one's national unity has been very much exploited by the current administration here," she said.

"There are solutions to migration that do not require clamping down on the press, on your political opponents and trying to suborn the judiciary, or seeking financial and political help from Russia to support your political parties and movements."

Clinton's message was met with criticism, to say the least. Many sceptics recalled that Clinton was one of the most vocal defenders of the 2011 Libya military intervention while in office, which is widely believed to have been a prelude to the refugee crisis that rocked Europe.

Hillary Clinton destroyed Libya and created a migrant exodus. But I’m glad she made these comments. I don’t have to say she is vile. She proves it herself. https://t.co/z7Z1a3lr9Q

If Hillary Clinton wants to fix the refugee crisis she should start by building a time machine and going back to prevent herself from becoming Secretary of State.

Hillary Clinton's longstanding, steadfast support for destabilizing military interventions in the Middle East is directly connected to the migrant crisis, and any journalist who questions her on the issue without bringing up this central aspect is absolutely derelict

Why are Clinton and Blair are solicited as voices of reason on Europe’s rightward drift and not pressed to take responsibility for their role in it by creating millions of refugees through deranged regime change wars? https://t.co/JO0uJoGFEW

Clinton was also reminded of her role in the Arab Spring and in the Syrian conflict, as well as the overthrow of Libya's former head Muammar Gaddafi, of whom she joked, "We came, we saw, he died."

President Obama/Secretary of States Clinton/Kerry:
— Promoted Arab Spring
— Red Lined in Syria.
— Overthrew Qaddafi w/o a plan for what next
— pallet loads of Cash to Revolutionary Guard.

Some people insisted that making concessions to make political gains is nothing new to the Clintons — and that this point can be reduced to absurdity.

Clintonism’s doctrine of granting major substantive policy concessions that cause substantial human suffering in exchange for political victories hasn’t changed much since the 1990s but I don’t think it’s where the Democratic Party base is now https://t.co/KJhOB4jVEQ

Clinton 2020: kill all Jews to stop the Nazis https://t.co/j9qXYPcLqE

That Hillary Clinton gave the interview on the eve of Thanksgiving, a holiday that celebrates immigration, was deemed ironic by some netizens.

“Wanna get rid of Nazis? Simple- get rid of minorities”
— Hillary Clinton, for some reason, on thanksgiving

Others argued that Clinton, like her fellow left-wing politicians, has been paying attention to the wrong things, and branded her a 'discredited centrist superstar'.

Very interesting that Blair, Clinton and the rest of them argue that immigration is a legitimate concern but not austerity, privatisation and wealth distribution.

Defeat the far right by surrendering to their ideas, say the discredited centrist superstars https://t.co/SRzfbX7TVA