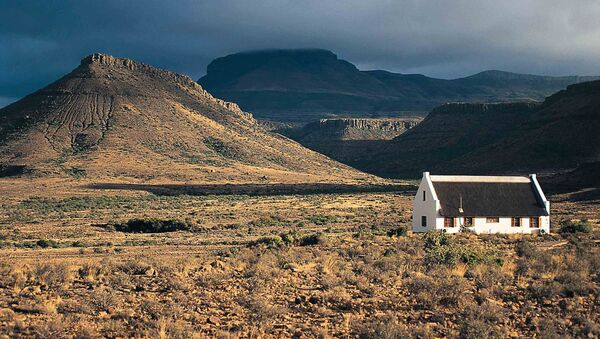 Denis Bolotsky
All materialsWrite to the author
The outcry from South Africa's white Boer and Afrikaner minorities over government land expropriation and farm murders has met with silence in the mainstream media; however, an activist from Southern Russia had set up a full-scale rescue operation to support these people.

Vladimir Poluboyarenko has a last name that's hard to pronounce for English-and Afrikaans-speaking South Africans, but in the past few months, the Christian activist and deputy ombudsman from Stavropol in Southern Russia has become a well-known figure in the "Rainbow Country".

In July of this year, the news about Poluboyarenko's televised initiative to invite Boers and Afrikaners to resettle in Russia spread quickly, and was translated into English and Afrikaans. The agriculturalists and their relatives currently face the ever-present threat of murder on their family farms as well as attempts by the government to expropriate their land through new legislative measures. Since then, the activist has recorded several video messages addressing the Boers.

Vladimir started receiving dozens of emails a week from Boers and Afrikaners who are willing to leave their country and relocate permanently to Russia. Many of them asked that their personal details not be published because of security concerns and the fear of being targeted.

In July Russian TV broke a story about Boers and Afrikaners potentially moving to Russia. Activists who are helping them to relocate get dozens of emails like the ones you see below.We were asked not to publish these people's personal data for the sake of their safety and privacy pic.twitter.com/Vlzqi3fhbO

Even though the initiative to invite South Africans to Russia was a private one, it received support from entrepreneurs, Christian activists, the Orthodox Church and, eventually, from local officials in three Russian territories — one in the south and two in the central part of the country.

Representatives of the Boer community visited Russia on several occasions this year to see for themselves the land that they will be able to rent or purchase, and, in turn, invited Vladimir Poluboyarenko to see for himself how they live in South Africa.

He launched a mini-crowdfunding campaign for his trip, with local entrepreneurs, scientists and even members of the clergy donating money for the cause.

When Vladimir Poluboyarenko decided to fly to South Africa to visit Boer and Afrikaner communities, he received blessings and financial support from people whom you would rarely see sharing the same ideas — priests and scientists donated their own money for the cause. pic.twitter.com/6PlTGpC47g

During his visit to South Africa, Vladimir is planning to travel to Boer and Afrikaner towns and communities, to hold talks with local politicians and religious groups.

"The response to the desire of Boer families to move to Russia was overwhelmingly positive, and it was a surprise for me how huge was the interest to this topic all over the world", he told Sputnik, adding that "over 200 families wrote to us asking for help in relocating".

Poluboyarenko stressed that the initiative is not aimed at particular social and religious groups, and besides farmers, he's ready to help all South Africans who wrote to him — the rich and the poor, factory workers and coal miners, lawyers and artists.

The criticism which the South African government recently received for its treatment of the white minority groups culminated in August, when the US Commander-in-Chief posted a tweet asking Secretary of State Mike Pompeo to look into South Africa's farm seizure issues.

Cyril Ramaphosa's government is attempting to dismiss the allegations, blaming "overseas fringe groups" for damaging South Africa's reputation. In his recent interview, which was quoted by several mainstream media outlets, Ramaphosa said that Trump is "ill-informed" about the situation in South Africa.

Nevertheless, it's becoming more difficult for the authorities to explain the recent farm attacks and murders in South Africa. The reports about farm attacks collected by Afrikaner NGOs look like news bulletins from a war zone, and not only locals fall victims to violence. Last week, Irish philanthropist and educator John Curran, who was working on projects sponsored by the ruling African National Congress (ANC), was brutally killed in his apartment building in Cape Town.

Another philantropist hacked to death in Cape Town https://t.co/tOfXJhbMn7 working for the ANC means you can be killed! Horrible!

According to the Free West Media news outlet, the police have been reluctant to share the information about the case, following ANC's concerns that the incident could lead to more bad publicity for the South African government.