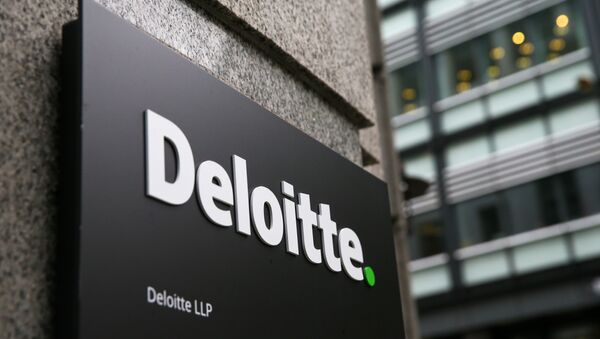 © AFP 2021 / Daniel LEAL-OLIVAS
Subscribe
Britain's "Big Four" accountancy firms will face a massive probe after being accused of monopolising the auditing market. Several have come under fire for misconduct after high-profile companies fell into administration under their watch.

The Big Four firms — Deloitte, EY, KPMG and PwC — dominate Britain's financial and corporate industry for auditing, mergers and acquisitions, consultation, among others.  But some experts say that the Big Four firms are accountable in the demise of several industry leaders such as British Home Stores (BHS) in 2016 and construction firm Carillion in 2018.

The Competition and Markets Authority, Britain's "fair and free market" watchdog, launched an auditing sector review on 9 October and will finalise a report before Christmastime. The group plans to gather feedback from the auditing industry over its effectiveness and challenges.

Whilst the Big Four firms audit nearly all companies listed on the London FTSE 100 index, financial uncertainty has continued to plague international markets since Enron's collapse in 2001 — the world's largest accountancy scandal in history, according to experts.

What Will the Market Study Determine?

The CMA market study will examine whether the market is working for the British public, but does not constitute an investigation into individual firms' practices, but can only take actions based on what the study finds after it is release at the end of the year.  The CMA published responses from its invitation to comment list detailing responses from the auditing industry, including all Big Four companies, and can take three groups of measures on a preliminary basis. The watchdog proposed breaking up financial oligopolies by creating audit-only firms, increasing competition amongst Big Four firms with market share caps and others, or diminishing incentives by using independent bodies instead of auditing firms to review companies.

What Has the Financial Reporting Council Said?

The FRC released a report in October detailing the substandard conduct of Big Four auditing firms, noting that 6 percent drop in quality overall (down from 78 percent) and 8 percent drop (down from 81 percent) in FTSE 350 audits, which previously held positive figures before declining performance in 2013.

The FRC increased the number of inspections from 126 to 170 in 2018 to reflect the growing auditing industry and strengthen compliance of the auditing sector.

One of the most detrimental shortcomings was a lack of consistency in 30 percent of total audits, which required firms to undergo Root Cause Analyses essential to "develop appropriate action plans which are likely to result in improvements in audit quality being achieved", the report summary said.  The report recommended an "enhanced programme of monitoring (AFMAS) for the largest audit firms in the UK" using five main pillars of compliance such as improving leadership and governance, values and behaviours, business models and financial ‘soundness', risk management and control, as well as auditing qualities.

Trouble related to Britain's auditing sector credibility erupted after the Financial Reporting Council lambasted professional services firm Pricewaterhousecoopers (PwC) for multiple instances of misconduct leading to the collapse of BHS in April 2016.  After years of slumping revenues, former BHS owner and Arcadia Group chairman Sir Philip Green pocketed over £400m ($524m) from the aftermath and later sold BHS for just £1 to businessman Dominic Chappell in March 2015. Following a parliamentary enquiry, the FRC slapped PwC with a £6.5m fine and fined Stephen Denison, a partner of the auditing firm, 325,000 pounds for his complicity in the retailer's collapse.

UK construction company Carillion also raised suspicions after Richard Adam, who was managing the firm's finances, dumped £534,000 in shares in March 2017 just months before leaving the company. As a bonus scheme payment to himself, Mr. Adam sold an additional £242,000 the following May.  A parliamentary inquiry in February revealed that auditing firm KPMG had reviewed Carillion's contracts, resulting in the construction firm downgrading its capitalisation to £845m ($1.039bn), leading to the company to liquidate assets and shed over 1,000 jobs and place another 11,000 jobs into uncertainty.

Chris Marsh, chief finance director of Patisserie Valerie, was arrested on 12 October after "significant, and potentially fraudulent, accounting irregularities" were reported in a Serious Fraud Office investigation. Evidence found "a material shortfall between the reported financial status and the current financial status of the business," forcing the company to halt trading shares. Patisserie Valerie commissioned PwC and Grant Thorton with sorting out its accounts at the time.