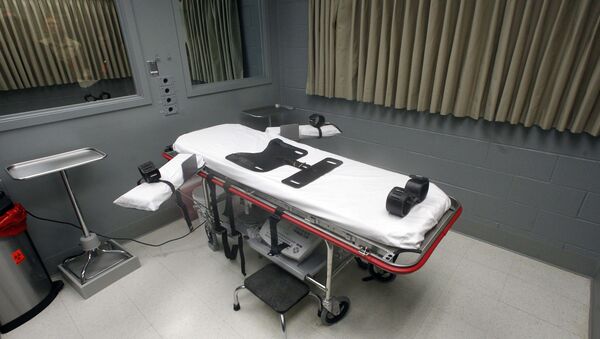 © AP Photo / Rick Bowmer
Subscribe
WASHINGTON (Sputnik) – The latest revelations that the CIA considered using so-called "truth drugs" after the September 11, 2001 terrorist attacks should not come as a surprise because of their documented later use at the Guantanamo prison, Dr. Jeffrey Kaye, clinical psychologist who has extensively written on torture, told Sputnik.

Newly-unveiled records, requested by the American Civil Liberties Union (ACLU), revealed last week that shortly after the 9/11 terrorist attacks the CIA weighed using an anti-anxiety sedative as a "truth serum" in interrogation of terror suspects.

Kaye, who has treated victims of torture, said the use of drugs against detainees held for indefinite periods without being charged at Guantanamo had been well documented.

CIA Was Fully Aware of Drugs Used to Assist Interrogations - Ex-Pentagon Analyst
"We know that CIA used blood thinning drugs to prolong standing sleep deprivation," Kaye said. "We also know that a drug long considered to be one of the ‘truth drugs,’ scopolamine, was administered to all prisoners rendered to Guantanamo."

The use of such drugs would constitute torture or cruel, inhumane treatment, by temporarily taking away a person's free will, the psychologist added.

One drug mentioned in the CIA report was midazolam, commonly known as Versed, Kaye noted.

"Versed, or midazolam, has been around for 40 years or so. The drug, part of the family of tranquilizers called benzodiazepines, is used primarily for light anesthesia in various medical procedures. It may occasionally be prescribed for epileptic seizures. It works for these purposes," he said.

Under the influence of Versed, people are supposed to be less likely to hold back things they do not want to say because the medicine would disinhibit brain functioning, the psychologist pointed out.

Former Guantanamo Chief Officer Urges Closure of Facility for US Security's Sake
"That is what a ‘truth drug’ is supposed to do. How well it actually works for such purposes, I can't say. In general, there aren't many studies on such things at least that are publicly available," he said.

The CIA may also have wanted to use Versed to induce amnesia in their subjects, Kaye observed.

"One thing I found tantalizing in the CIA/OMS [Office of Medical Services] report is that the fact Versed could produce some amnesia in a subject was something they found ‘desirable.’ There is no further discussion of why that might be in the report," he said.

Any use of Versed on prisoners or other subjects should be seen as a form of torture, Kaye emphasized. Even if Versed itself was not widely used, it appeared likely that the CIA did use drugs to prepare individuals for interrogation on a wide scale, he added.

"That doesn't mean the use of drugs in general are not widespread, meaning not for interrogations, per se, but to breakdown individuals or otherwise contribute to making them more pliable for interrogation," Kaye said.

The Department of Defense had also been accused of using drugs in interrogations, the phycologist added.

According to ACLU, the CIA ultimately decided to refrain from the "truth serum’s" use in order to avoid issues with the Justice Department as well as ethical problems for doctors to be involved in interrogations.

According to the CIA report, the project lasted for five years — from 2002 to 2007 — and involved physicians, psychologists and nurses, among others. The specialists monitored and "provided quality care" to almost 100 detainees in 10 CIA facilities.

On September 11, 2001, terrorists seized four passenger planes, crashing two into the World Trade Center in New York and another into the Pentagon. The fourth jet came down in a field in Pennsylvania after being initially directed toward Washington. Some 3,000 people from 90 countries lost their lives in the terrorist attack.