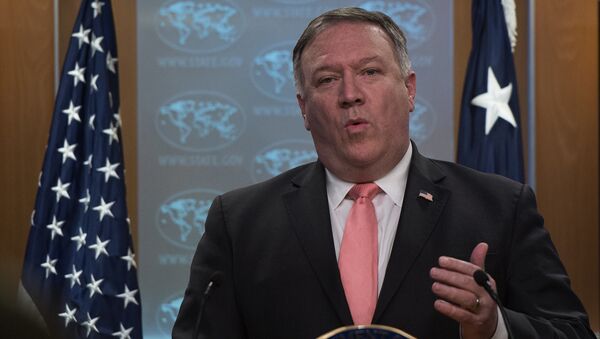 In an interview with a radio station, US State Secretary Mike Pompeo commented on the White House’s stance on Saudi Arabia in connection to the Jamal Khashoggi case.

US President Donald Trump's administration is open to Congress' proposals regarding sanctions against Riyadh, but it thinks that what has already been done is enough, Pompeo said Wednesday in an interview for KMOX radio.

Pompeo commented on the White House's course of action towards Riyadh in connection to the killing of Washington Post journalist Jamal Khashoggi.

"The president is happy to consider whatever members of Congress share with him or legislation that's presented to him, and I think the president was very clear in his statement yesterday," Pompeo said. "To the extent they have good ideas that further American national security, this administration will be happy to support them."

US Institute Sues Spy Agencies For Not Preventing Khashoggi Death
Pompeo said that certain punitive actions have already been taken by the administration.

"We've been very clear. We're going to hold those who conducted this murder accountable. We've already done so. We've sanctioned 17 people, some of them very senior in the Saudi government," he said.

However, he pointed out that the White House has also taken note of the positive changes in Saudi Arabia before the Khashoggi incident.

"We are going to make sure that America always stands for human rights. We've watched the Saudis actually move in that direction during our time in office as well. It's not an unblemished record, but there certainly have been steps forward," Pompeo said.

Washington Claims in Report China Intensified Efforts to Obtain US Technologies
According to Pompeo, Iran "presents real risk to the American people," and Saudi Arabia aims to curb Iran's influence in the Middle East, which makes Riyadh an "important national security partner to the United States."

"We are determined to make sure that the relationship between the United States and Saudi Arabia stays strong, so that we can protect America," Pompeo said.