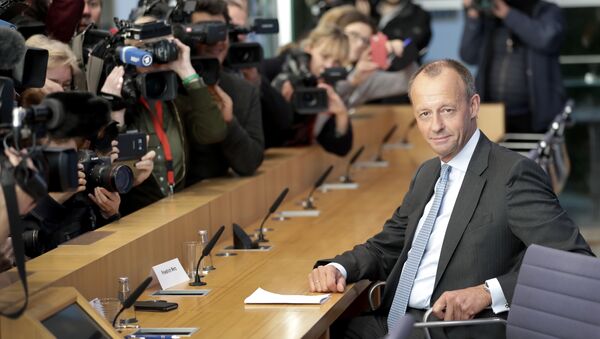 © AP Photo / Michael Sohn
Subscribe
One of the candidates aspiring to replace Angela Merkel as the CDU’s chair after she refused to seek re-election has come under fire for calling to discuss if the right to asylum specified under Germany's Basic Law can continue to exist “in this form".

Friedrich Merz, a candidate for the Christian Democrats’ leadership, has triggered debates both within his party and among political rivals after he expressed doubts that the asylum right should continue to be a feature of the country’s Basic Law, which serves as its constitution.

“If we want to regulate immigration at the European level, then someday we will need a general debate on the fundamental right to asylum…I have long believed that we need to think about it," Friedrich Merz said when he and his competitors for the CDU’s leadership presented their positions to fellow Christian Democrats.

The remark has sparked debates in Germany, the only EU country to guarantee asylum-seekers refuge in its constitution.Politicians on the right, on the left and in the political centre criticised the CDU leadership candidate, although they  had different arguments.

The right-wing Alternative for Germany, which advocates a stricter stance on migration, accused Merz of stealing their ideas. Parliament group leader Jürgen Braun tweeted that "In the fight for the CDU chairmanship and better poll numbers, Friedrich Merz uses a tried and tested means: copying the AfD!" His colleague Dirk Spaniel said that Merz has occupied the AfD’s grounds on the right.

The Social Democrats, who are the CDU/CSU coalition's partners now, also expressed their outrage at the spokesman for his populist stance. Lawmaker Johannes Kahrs slammed both Merz and his rival candidate, national Health Minister Jens Spahn, for opting to play 'the AfD card', Handelsblatt reports. He suggests that the AfD would profit as a result.

"Doubting people will choose the original, not the CDU copy," Kahrs said.

"He is in every way a Trump light, just a millionaire and not a billionaire. The Greens, who now run after the CDU, would still wonder how nice that will be," he tweeted.

Merz’s statements were opposed by the Greens, who preferred to keep the constitution as it is.

"The basic right to asylum is the doctrine of the constitution from the terrible experiences of Jews who sought to flee Nazi Germany and from the flight experience of millions of Germans," said Green Party Deputy Leader Constantine von Notz.

Merz has also faced a backlash within his own party, while his competitors attempted to take advantage of the outrage directed against him.

"The fundamental right to asylum for the politically persecuted is a great achievement of our constitution against the background of the two world wars, great suffering and expulsions. The problem is that it's being exploited too often today, leading to uncontrolled migration," Jens Spahn tweeted.

Another candidate for the CDU leadership and Angela Merkel’s favourite, Annegret Kramp-Karrenbauerhas, or AKK, rejected a restriction of the asylum law, saying it would violate the spirit of the constitution.

It’s AKK who leads the polls as the most possible replacement for Merkel, the respected Deutschlandtrend survey suggested in mid-November; Merz came in second.

Merkel, who has been CDU leader since 2000 and chancellor since 2005, announced in late October that she would not seek re-election as party leader in December or seek a fifth term as chancellor in 2021, setting a deadline for her exit from German politics.

The announcement came shortly after the CDU suffered a setback in a state vote in Hesse, while its Bavarian sister party, the Christian Social Union (CSU), sustained its biggest loss in half a century in last month's election to the regional parliament.

Merkel’s way to handle the migration crisis, which hit Europe and Germany in particular in 2015 due to an influx of hundreds of thousands of people fleeing crises in the Middle East and North Africa, has caused discontent among Germans.

000000
Popular comments
Germany is already way past the point of no return. Germany lost this war on ILLIGAL migrants and soon Sariah law and a Mosque on every corner will be the norm in Germany.