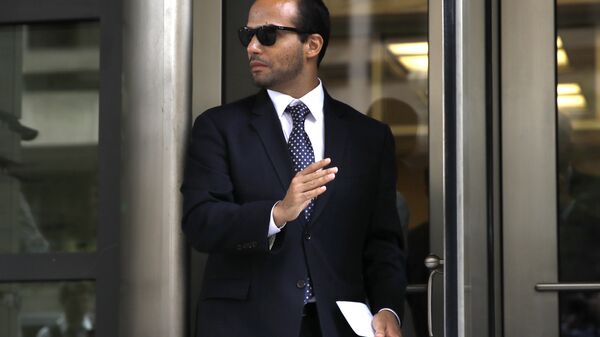 © AP Photo / Jacquelyn Martin
Subscribe
International
India
Africa
WASHINGTON (Sputnik) - Former Trump campaign aide George Papadopoulos said in a statement on Wednesday that he has never changed sides during the FBI investigation into allegations of Russia-Trump collusion in the 2016 US presidential election.

"I never flipped against the president [Donald Trump]," Papadopoulos said via Twitter.

Papadopoulos is due to surrender on November 26 and spend 14 days in jail for lying to federal prosecutors about contacts with Russian intermediaries during the 2016 race.

Dems in US Congress Demand Trump Administration Preserve Russiagate Probe
The Trump campaign aide said in the message that all he did was "expose the corruption of this ‘investigation’ for the world to see."

Papadopoulos is echoing statements about the Russia investigation expressed by Trump, who has frequently characterized it as a "witch hunt" and accused the team of Special Counsel Robert Mueller of bias and corruption.

Earlier on Wednesday, a new lawyer for Papadopoulos asked the US District Court for the District of Columbia to delay his client's surrender date. Yet, the federal prosecutors opposed this motion because Papadopoulos made a number of public statements "that appear to be inconsistent with his stated acceptance of responsibility."

Papadopoulos also received one year of supervised release, 200 hours of community service and was ordered to pay a $9,500 fine.