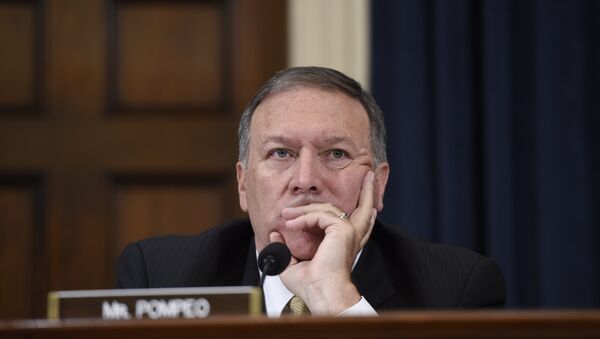 The United States claims that an illegal scheme is in place to support Syrian President Bashar Assad and provide financial assistance to Hezbollah and Hamas.

US Secretary of State Mike Pompeo has promised severe consequences for anyone who is supplying oil to Syria or trying to circumvent US sanctions against Iran.

“Today’s US Treasury’s action targeting the Russia-Iran oil scheme to prop up [Syrian President Bashar] Assad, and finance Hizballah & Hamas, sends a clear message: there are grave consequences for anyone shipping oil to Syria, or trying to evade U.S. sanctions on the Islamic Republic’s terrorist activities,” Pompeo wrote on Twitter on Tuesday.

Today’s @USTreasury action targeting the Russia-Iran oil scheme to prop up Assad, and finance Hizballah & Hamas, sends a clear message: there are grave consequences for anyone shipping oil to Syria, or trying to evade U.S. sanctions on the Islamic Republic’s terrorist activities.

He added that Iran’s spiritual leader, Ayatollah Ali Khamenei, “should decide if spending the Iranian people’s money on the Iranian people is more important than inventing schemes to fund Assad, Hizballah, Hamas, and other terrorists”.

On Tuesday, Washington added six individuals and three organisations to its sanctions list claimed by the Treasury to be involved in oil shipments to the Syrian government, among them the Russian companies Global Vision Group and Promsyryeimport, and the latter company’s first deputy director Andrei Dogayev.

The list also features two Iraqi nationals, a Lebanese, a Syrian and an Iraqi,as well as the Iranian-registered Tadbir Kish Medical and Pharmaceutical Company.

According to the US Treasury Department, the Global Vision Group and Syrian citizen Mohammed Amer Alshviki, who, according to Washington, is the company’s owner, allegedly play a key role in a scheme for petroleum shipments to Syria and financial transfers to the Quds Force special unit of Iran’s Revolutionary Guards Corps.

Shortly before that, US Special Representative for Syria James Jeffrey stated that the recently imposed second batch of US sanctions against Iran are aimed at forcing Tehran to reduce its ‘presence’ in Syria.

Russia and Iran are yet to comment on these accusations and sanctions.