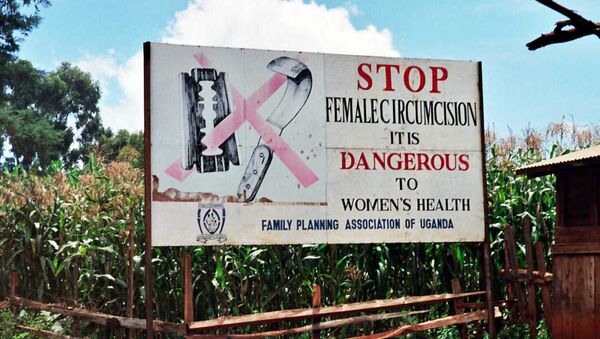 According to Judge Bernard Friedman from Michigan, Congress, as it was passing historic legislation on female genital mutilation, “overstepped its bounds,” as the statute law has to be tested and approved - or not - individually by each state.

A federal judge, Bernard Friedman, has dismissed a number of charges brought against eight people, including two medical workers, in the genital mutilation case in which nine girls underwent the procedure at a clinic outside Detroit. In particular, the charges were dropped against Dr. Jumana Nagarwala, who performed the surgery, and Dr. Fakhruddin Attar, who allowed his clinic in Livonia, Michigan, to be used for this.

Four of the said girls are locals from Michigan, while the rest come from Illinois and Minnesota.

When addressing the matter, Friedman remarked that the issue had from the very start been out of Congress’ competence, which makes the historic ruling a real blow to the federal  government.

"As laudable as the prohibition of a particular type of abuse of girls may be… federalism concerns deprive Congress of the power to enact this statute," he pointed out in a 28-page opinion file. “Congress overstepped its bounds by legislating to prohibit (female genital mutilation).”

In a nutshell, America's female genital mutilation law, adopted in 27 states, has been declared unconstitutional in the state of Michigan.

FGM is banned worldwide and has been outlawed in more than 30 countries, though the US statute had never been tested before this case popped up.

According to Friedman, "FGM is a 'local criminal activity' which, in line with long-standing tradition and our federal system of government, is for the states to regulate, not Congress."

Among the states, in which cutting is criminalized, Michigan has the stiffest law, which stipulates up to 15 years in prison for FGM, as compared with five under federal law.

Michigan’s law was adopted last year in wake of the aforementioned case and presupposes punishment for both doctors involved in the procedure and parents who send their child to get it done.

According to Gina Balaya, spokesperson for the US Attorneys Office, the government is currently reviewing the judge’s opinion and the precedent, as well as deciding whether to appeal the ruling. Friedman’s verdict came following a request by Dr. Jumana Nagarwala and her codefendants to dismiss the genital mutilation charges, claiming the new law they are being prosecuted under is in violation of the constitution.