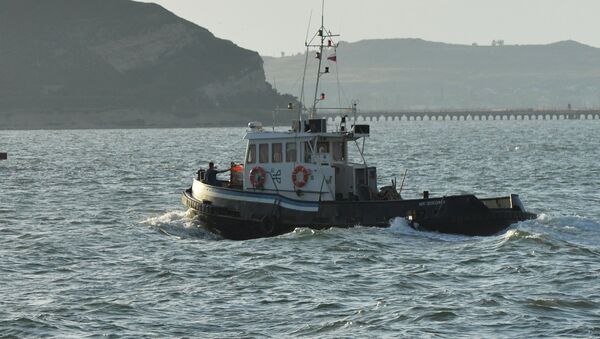 According to the UK Foreign Office, Russia’s continued disruption of ships attempting to access Ukrainian ports in the Sea of Azov is destabilizing the regional economy. It added that restrictions have been accompanied by the increased Russian military presence in the area.

The statement said that so far, more than 200 vessels had been affected and that the policy is damaging Ukraine's economy and undermining its sovereignty.

Sputnik: How legal are these calls from the UK to Russia? Could you, perhaps, give us a little bit of a background of the legal status of the Azov Sea?

UK to Send Marines, Warship to Ukraine for Sake of 'Democracy' - Reports
Erik Franckx: I think that the Soviet Union one day in 1985 closed off the Sea of Azov. I think that was a quite acceptable move by drawing straight baselines in the mouth of the bay and declaring that all the waters on the inside became internal waters. Even the United States at that time, which is normally very reluctant to accept baselines from other countries, didn't have any problem with the Soviet Union calling this "historic waters."

The possibility then exists, of course, that both states want to continue that kinds of relationship; and in international law we have seen certain kinds of examples, even cases before the International Court of Justice, where tribunals and courts have accepted that, indeed, if states are in agreement, they can continue that status. I think that is, indeed, what the 2003 agreement provides for.

Sputnik: The 2003 agreement between Russia and Ukraine actually saw both countries treating Azov as historical internal waters for both Kiev and Moscow. Why is that agreement being ignored by European states at this time?

Russia, Japan Peace Treaty Talks Require Tokyo's Allied Obligations - Kremlin
Erik Franckx: To a certain extent, I think we have to be a little bit more specific, because the agreement provides for rights and obligations between the two parties, but at the same time it also provides for rights and obligations for third states. If you read the agreement, you will see that the shipping of national ships of Ukraine and Russia is certainly regulated, they have full freedom of navigation with respect to commercial vessels as well as war vessels; but at the same time, there're also rights provided for third parties.

It stated that as far as commercial vessels of third parties are concerned, they have a right to sail to a port inside the Sea of Azov and have this same kind of freedom of navigation; and as far as war vessels are concerned, the agreement is a little bit more specific and more restrictive in the sense that it will require, first of all, the acceptance or authorisation of one of the two states, and also the other state, meaning either Russia or Ukraine, has to agree that foreign war vessels enter into the area. But as far as commercial vessels are concerned, they have a right to be in that area.

Sputnik: According to an FCO spokesperson, "Russia and its security forces continue to disrupt Ukrainian international shipping calling at Ukrainian ports in the Sea of Azov. In March Russia opened an unlawfully constructed bridge across the Kerch Strait connecting Russia to the illegally annexed Crimean Peninsula." What are your thoughts about how the whole conflict between Moscow and Kiev has affected the status of the Sea of Azov?

Erik Franckx: The construction of the bridge, of course, creates a problem from an international legal perspective in the sense that if waters are to be accessed by ships and you grant the ships freedom of navigation, then, of course, it would be counterproductive by means of artificial constructions to make such constructions that the ships no have longer the possibility to enter.

US to Avoid Sea of Azov, to Keep On Operating in Black Sea Region - Admiral
There was this international case between Denmark and Finland, where Denmark wanted to construct a bridge over the Great Belt, the entrance of the Baltic Sea. At that time the two countries had a major conflict; it came before the International Court of Justice. But finally the case was settled out of court; but the fact was that Denmark had to pay Finland quite a substantial amount of compensation, $15 million, simply because the bridge was 65 meters high and the Finnish company involved were specializing in oil rigs, which are special ships having very high towers that sometimes reach 100 meters and higher.

Here we see that a bridge of 65 meters apparently gave rise to an international claim. Of course, two cases are never exactly the same; here it was international navigation which was at stake, and in the case of Kerch Strait, it's a bilateral treaty which creates these rights to the parties. Nevertheless, the number of ships is much broader and these are normal vessels that are now hindered from coming and reaching ports inside the Azov Sea. If my information is correct, about 25% of certain ships going through the ports of Ukraine no longer have this possibility to reach these ports because of the construction of the bridge.

Sputnik: There's also the issue of Russia conducting stop-and-search operations for the cargo ships arriving and leaving Ukraine's ports. What is necessary to really regulate this? Is there some kind of a mechanism available to, perhaps, regulate this? That must be quite difficult, actually, because of the status and the conflict between Ukraine and Russia right now.

Eight NATO Air Forces to Fly to Ukraine for Massive Drill
Erik Franckx: That's totally correct. The only problem is, of course, is that if you look at the 2003 agreement, not much is provided. The only thing which Article 3 states is that this should be jointly undertaken by both sides; so I don't think it gives one of the parties the right to conduct random inspections, especially if those inspections have an influence on the freedom of navigation. If by your inspections you're starting to hinder the freedom of navigation to an extent above what one would consider normal, I think this might lead to difficulties between the parties.

Sputnik: Is it likely that there will be some changes that will be proposed to the accord? What would be the mechanism for that being regulated?

Ukraine to Build Naval Base Along Turbulent Azov Sea
Erik Franckx: As you know, Ukraine has a large case before an arbitral tribunal exactly with respect to these issues. I would say that for the moment, both parties are totally in agreement with the 2003 treaty to settle the disputes in a peaceful manner, have seized the International Tribunal in order to clarify how these specific issues should be solved.

Sputnik: So, there is an international tribunal; is there an active case right now?

Erik Franckx: That's exactly what I'm trying to say. A case has been brought before the tribunal according to the United Nations Convention on the Law of the Sea. That was done recently; and the case has just decided that they would first treat the issues of jurisdiction; this was decided in August of this year. So, now it will first be decided whether the case can be decided by this arbitral tribunal, or whether Ukraine has no reason to bring the case before the court.

Sputnik: So, this was brought to the international tribunal by Ukraine.

Moscow Regrets Ukraine’s Termination Treaty of Friendship With Russia
Erik Franckx: That's exactly true. It was a unilateral move by Ukraine which Russia has accepted to respond to. And this is quite remarkable, because you might remember the Arctic Sunrise Case, where 30 activists from Greenpeace were detained and their ship was arrested up north, in the Arctic waters. At that time, Russia refused to participate in the proceedings. Unfortunately for Russia, the decision was unanimous and held that Russia didn't comply with its international legal obligations. I think that today Russia is more careful and at least is trying to fight the case from within and to participate in the legal proceedings.

Sputnik: Based on international precedents, you mentioned the case a little bit earlier about a bridge being constructed, what do you think the outcome of this kind of tribunal would be? What is the likely decision?

As you know, the whole problem of Crimea is, of course, very much involved and the Law of the Sea Convention, on the basis of which this tribunal has been established, has no competence to deal with these issues; it can only deal with law of the sea issues.

Sputnik: If it's decided that this tribunal is, in fact, not competent, are there any additional steps that Ukraine can take? What remains to resolve the ongoing conflict?

Erik Franckx: If you look at the treaty itself, it says that only peaceful means can be used to settle any dispute that might arise in the application of the treaty. So, the parties should then, if there's no legal solution to the issue, they should themselves try to find a practical arrangement to stop the escalating tensions within the Sea of Azov.

Sputnik: With the relationship having significantly soured in the last decade, what are the chances that there will be some kind of a resolution? There's also an increased Russian military presence; are there other military presences? What military presence do we currently have in the Sea of Azov?

Erik Franckx: As I've said, the fact is that military vessels don't have the right to enter into the Sea of Azov, at least third states' military vessels, unless they have an agreement with one of the two parties and the other party doesn't disagree with it. It means that, probably, there will be no military presence inside the sea; but, of course, the fact is that on the outside of the Sea of Azov, in the Black Sea, foreign military presence is possible.

I do recall that in the 1980s, the US, in their freedom of navigation program, very much made use of that right by sailing through the territorial sea of the Soviet Union, to the south of the Crimea, to test the Soviet attitude towards the innocent passage of warships through their territorial waters.

The views expressed in this article are solely those of Dr Erik Franckx and do not necessarily reflect the official position of Sputnik.