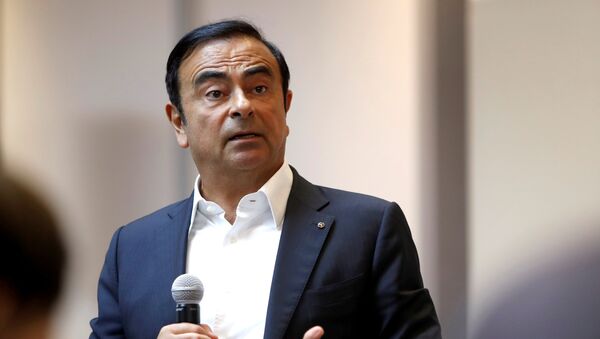 TOKYO (Sputnik) - Tokyo's Public Prosecution Office is considering filing a lawsuit against the Renault-Nissan-Mitsubishi Alliance as a legal body over suspected embezzlement by the CEO of the alliance, local media reported on Wednesday, citing unnamed sources.

Carlos Ghosn, the Renault-Nissan-Mitsubishi Alliance CEO, was arrested on Monday on suspicion of financial misconduct. The alliance claims that he has been using the company's assets for personal purposes.

Nissan Stocks Slump After CEO Ghosn Arrest, Renault Searches for Interim Chief
According to the Asahi Shimbu newspaper, Tokyo's Public Prosecution Office's move to file a separate lawsuit against the alliance may be triggered by the fact that while Ghosn has been long concealing a part of his income, high-ranking employees of the company have been actively assisting it.

As Ghosn used the alliance's funds for acquiring real estate in Paris, Beirut, Rio de Janeiro and Amsterdam for him and his family, Greg Kelly, the company's representative director, ordered executive directors to register transactions as apartments purchase for corporate funds.

The Public Prosecution Office has agreed with several executive directors to cooperate. If they provide necessary information and assist investigators, they may be granted certain allowances.

On Monday, Nissan said in a press release that it had launched an internal investigation into Ghosn and Kelly a few months ago following a whistleblower report. According to the company, Ghosn could have concealed around 5 billion yens (around $44 million) worth of income between 2010 and 2015.

Both Ghosn and Kelly may face up to 10 years in prison, a 10 million yens fine or both of these penalties just for under-reporting the chairman's income.