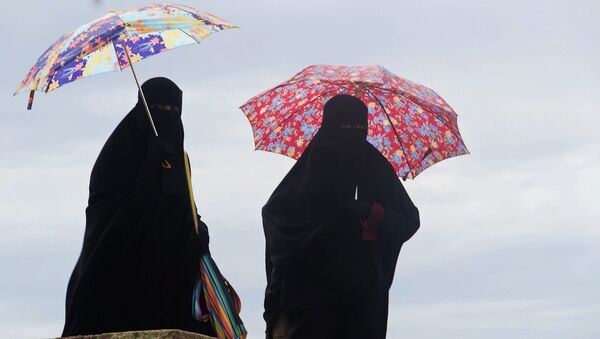 Finnish women converting to Islam don't see the veil as a symbol of oppression, but as a sign of liberation from superficial beauty, a researcher specialising in religious issues has claimed.

Veiled women on Finnish streets have become an increasingly familiar sight. This is partly due to the recent wave of migrants and asylum seekers from Muslim countries starting from 2015 and partly to Finnish women converting to Islam of their own accord, national broadcaster Yle reported.

According to University of Jyväskylä researcher and ethnologist Meri Tuovinen, Turku and other major Finnish cities have seen a rise in conversions to Islam, most often by ethnic Finnish women who previously had no affiliation with and no exposure to Muslim culture. Big cities offer more opportunities in finding like-minded spirits and have more events going on, she explained.

Tuovinen stressed this goes in lockstep with the international trend, as Islam keeps growing across the Western world, while other religion shrink or at best stay at the same level.

Despite the absence of national statistics, Tuovinen is positive that the number of converts is on the rise in Finland. For her extensive research, she interviewed 31 ethnic Finns-turned-Muslims in various parts of the country. Of them, 28 are women and three men.

While the respondents are a mixed group, of different ages, backgrounds and with different positions in society, what all the 31 converts had in common was the perception of Islam as a 'logical' and 'intellectual' religion, which 'better fits with historical events'. Yet another explanation was that Islam allows people to establish a 'direct contact with God'.

The female Finnish converts also claimed to be 'liberated through the Islamic headdress', which allows them to 'escape Western beauty ideals and expectations'.

"The paradox is the women themselves feel that they are freed by their headgear while this outfit in the West is generally regarded as a sign of compulsion and inequality," Tuovinen explained to Yle.

The idea that the number of converts is rising was shared by Pia Jardi, a proud Muslim since 1986, Helsinki Mosque employee and a collaborator with the National Forum for Cooperation of Religions (USKOT). According to Jardi, people are drawn to Islam by its clarity, direct contact with God and rites with transparent meaning.

In 2016, the Pew Research Centre estimated that about 2.7 percent of Finland's 5.5 million population is Muslim, suggesting that it could grow to 15 percent by 2050. Historically, Finnish Muslims almost entirely consisted of Finnish Tatars, but has grown to embrace other population groups, such as Arabs, Somalis, Kurds, Turks and Albanians.

Additionally, a 2018 survey revealed that almost two-thirds of Finns (62 percent) believe Islam is fundamentally incompatible with the culture and values of Finland. Furthermore, over a quarter said they would never accept a Muslim as a family member, whereas 14 percent were opposed to having Muslims as neighbours.