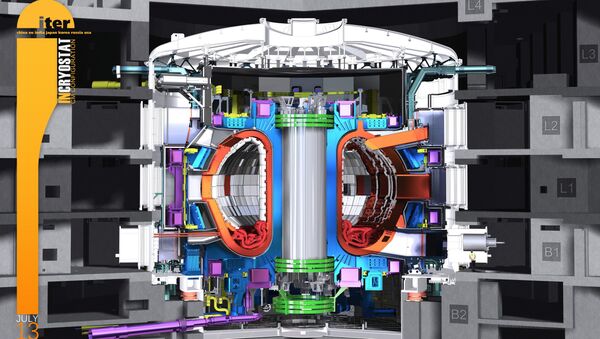 China has created an ‘artificial Sun’ that is several times hotter than the actual one. With the help of The Experimental Advanced Superconducting Tokamak (EAST) in the city of Hefei, scientists heated up plasma to 100 million degrees Celsius.

The successful experiment by Chinese scientists is an important step towards the creation of an International Thermonuclear Experimental Reactor (ITER).

Scientists have been thinking for more than half a century of how to obtain energy using thermonuclear fusion. This is potentially a technological revolution: energy can be obtained without using much water at all. Moreover, a thermonuclear reaction is much safer than traditional nuclear power, which uses radioactive elements as a fuel material. However, so far the technology is only in the developmental stage.

No country has yet established a controlled thermonuclear process to produce energy on an industrial scale. The major challenge is how to isolate the plasma heated up to millions of degrees from the walls of the reactor.

Thermonuclear Fusion: How Scientists Hope to Extract Energy of Stars on Earth
‘Tokamaks' are used for that specific purpose. It is a toroidal-shaped envelope with magnetic coils. ‘Tokamak' holds plasma with a magnetic field. However, it is not yet possible to hold the incandescent plasma for a very long time. Nevertheless, in the current experiment in ‘Tokamak' EAST, the Chinese were able to hold it heated to over 100 million degrees for a record 10 seconds. China along with other 34 countries, including Russia, is participating in the development of the International Thermonuclear Experimental Reactor.

Sputnik has discussed the EAST project with Deputy Director Song Yuntao about how the results of this experiment will influence the development of thermonuclear fusion in the world.

Sputnik: What is the role of the EAST project in the development of the controlled thermonuclear process in general?

Song Yuntao: As part of the EAST project, we work with ultra-high temperatures of more than 100 million degrees, and with ultra-low to minus 269, and with ultra-high currents, with an ultra-strong magnetic field, ultra-high vacuum, and other extreme phenomena. In the process of creating and operating EAST, we are developing 68 key technologies that have shaped many innovations.

News and Views: China Unveils World's First AI Anchor (VIDEO)
For example, a large superconductive magnet, ultra-high vacuum, tungsten diverter, and production of superconductive semiconductors. All these technologies, first of all, fill in the gaps in domestic science and have broader prospects for practical application. Some selected technologies are internationally recognised and being adopted.

Physical experiments within the framework of the EAST allowed us to set quite a number of records in the course of the work of ‘Tokamak'. The project has become an important platform for international experimental research in the field of controlled thermonuclear fusion. That means it is possible to conduct experimental studies on the as of yet unresolved issues of thermonuclear reactions. Thus, EAST helps to create physical and engineering capabilities for the further stable, safe, and effective development of such advanced technology as thermonuclear fusion.

READ MORE: The Future of War: Autonomous AI and the Threat of ‘Killer Robots' — Report

Sputnik: What is the difference between the EAST and Tokamaks developed by other countries?

Song Yuntao: EAST is the world's first experimental superconducting Tokamak with a noncircular cross-section. Its main three features are ultra-high conductivity, non-circular cross-section and active cooling of internal structures. The goal of the project is to solve scientific and engineering problems in the field of maintaining the stability of incandescent plasma in the reactor core.

Compared with other nuclear science and technology facilities for research on controlled thermonuclear fusion, EAST is the closest in its properties to the International Thermonuclear Experimental Reactor (ITER) project. And for many more years, it will be the most powerful experimental installation for experiments in long pulse discharges.

Sputnik: What physical and technological issues will this installation help to solve?

Song Yuntao: These are the key scientific and technical issues of a future stable model of controlled thermonuclear fusion and work in long pulse discharges. In 2016, EAST held the plasma heated up to 50 million degrees for 102 seconds, in 2017 — for 101 seconds. In 2018, we were able to hold the plasma with a temperature of 100 million degrees, wherein the plasma was of a stable state with high density. Experiments under the EAST project provide knowledge and create the necessary conditions for the future of controlled fusion.

ITER Project Needs More Russian Specialists - Director-General
Sputnik: China participates in the ITER program. Why do you need to develop your own reactor?

Song Yuntao: Creating a large-scale reactor to generate energy from controlled thermonuclear fusion is a key practical step in exploring this area. However, ITER is only one of the links in this process. And the creation of our own reactor for China is also one of the links in a broader research process in this area.

Sputnik: What do you think; will it really be possible to get electricity as a result of controlled thermonuclear fusion by 2030?

Song Yuntao: In the process of experimenting with nuclear fusion, we have repeatedly been able to solve scientific and technical problems of a ‘breakthrough' nature. However, when you begin to analyse the remaining problems and their scale, it becomes clear that to generate electricity, you need to make more than ten or even several dozen such ‘breakthroughs' in fusion technology.

The development of fusion technology rests not only on scientific and technical difficulties. The socio-economic level of development also imposes certain restrictions. There is no doubt that the generation of electricity through fusion is an achievable goal. But when this goal will be achieved largely depends on public support and the needs of society with regard to this technology.

Sputnik: But if the thermonuclear reaction does get a practical application, what will happen to the prices of traditional energy sources like coal and crude oil? Would that mean that their prices will fall?

STRATCOM: US Must Not Trail China, Russia in Aspects of Hypersonic Technology
Song Yuntao: Conventional sources of energy — oil and coal — will remain relevant for a long time. Only after the technology of controlled thermonuclear fusion will be widely used, the public demand for conventional energy sources will drop significantly. But this is a long process. It will not be possible to completely replace the traditional energy products very soon, although that is the ultimate goal that we have set.

Views and opinions, expressed in the article are those of Song Yuntao and do not necessarily reflect those of Sputnik.