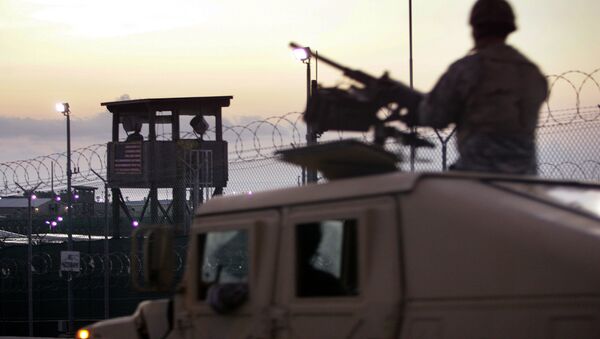 © AP Photo / Brennan Llinsley
Subscribe
International
India
Africa
The US National Defence Strategy Commission (NDSC) released a report on 13 November offering an assessment and set of recommendations to the Pentagon, alleging that "rivals and adversaries are challenging the United States on many fronts and in many domains".

Sputnik spoke with Harvey Schlanger, vice chairman of the board of directors for the Schiller Institute* in Washington, DC.

Sputnik: What does the assessment indicate about the current US administration's foreign policy priorities?

Harley Schlanger: The assessment presented in this document reflects the outlook of unhinged neo-conservatives and their commitment to geopolitical confrontation, as a means of defending an imperial policy which has failed, and is collapsing in the face of a global rejection of this policy. It goes beyond previous National Defense Strategy reports in its characterisation of Russia and China as having become aggressive adversaries and "authoritarian competitors", and in its assertion that the United States is now "in competition and conflict with an array of challengers and adversaries."    This language is that of those who greeted the collapse of the Soviet Union as the moment for the US to assert its power unilaterally, to act as the sole superpower in the world.  This geopolitical unilateralism dominates both political parties in the US.

It should be noted that this neo-conservativism, which has led the US into uninterrupted wars since 2002, was attacked forcefully by Donald Trump both during his 2016 presidential campaign, when he was sharply critical of the provocative stance of his sixteen Republican opponents and of Hillary Clinton in the general election, and since his election as President.    He continues to advocate peaceful cooperation with Russia and China, reiterating again in 2018 midterm election campaign rallies, his desire to follow up his meetings with President Putin in Helsinki and President Xi in Beijing with talks to pursue common policies.    It is well known in the US that those who have been involved in running the "Russiagate" coup to constrain or remove President Trump are advocates of the provocative views contained in this document, and have been engaged in "regime change" operations against him, precisely to prevent him from establishing better relations with Russia and China.

Sputnik: Are the United States and other NATO allies living in "dangerous times"? Why does the defence bloc wish to continue a policy of unilateral force against a rising Russia and China?

Harley Schlanger: These are indeed "dangerous times", due to the continued commitment of British and American neocons and imperial geopoliticians to confrontation against Russia and China.    The so-called "Thucydides Trap" is not caused by actual Russian or Chinese threats to western security, but by the policies of the George W. Bush and Barack Obama administrations.

To defend their bankrupt and collapsing global order, they deployed US military force worldwide, while pursuing economic policies which have looted developing sector nations and undermined the real economies of western nations, through "outsourcing" from "free trade" agreements, deindustrialization policies which have destroyed the productive work force, and anti-scientific "green" policies which have dramatically lowered productivity.    These policies, which have been enforced by global institutions such as the IMF, World Bank, and the European Union, have turned growing numbers of citizens of Trans-Atlantic nations against their governments and ruling parties.

Sputnik: What are the best ways to mitigate global conflict? Should the US pursue a policy such as the one outlined in the assessment, or build a more multipolar strategy?

Harley Schlanger: The policy course advocated by the National Defense Strategy Commission must be rejected, in favor of a commitment to pursue policies of mutual benefit, which represent the "common aims of mankind."   The Schiller Institute has called for adopting the "Singapore model", referring to the summit between President Trump and North Korean President Kim Jong-un, to resolve disputes.  The success of that summit was based on a two-fold perspective.    First, a multipolar initiative, which included collaboration between the US with China, Russia, Japan and South Korea, to bring peace to the Korean peninsula. Second, the key was not military threats, but the offer to North Korea to provide economic incentives, through incorporating its economy into China's Belt-and-Road Initiative.    This has the support of President Trump, despite the vehement opposition of American neocons from both within and outside his administration.      The endless wars the US is engaged in are a direct result of unilateralism. President Trump was elected largely due to his criticism of Hillary Clinton's support for unilateralist policies, as he recognized Americans were war weary and the economy was burdened by the direct costs of war, and the demoralizing effect of these wars on the population. A clearly defined commitment to multipolar solutions would be supported by the majority of Americans.

Sputnik: What are some of your organisation's personal opinions about the current state of affairs in US defence policies? What would you like to see change?

Harley Schlanger: End support for regime change, based on the fraudulent and anti-Democratic concept of Responsibility to Protect.  Second, the idea that a major increase in US and NATO defense spending, along with adopting "new operational concepts" are needed to halt alleged aggression by Russia and China, is a "utopian" concept which accepts the idea that a nuclear war can be won. This insane belief must be rejected.    Instead, the Schiller Institute has been committed, since its founding in 1984, to collaboration between nuclear superpowers to adopt the original concept of the Strategic Defense Initiative of Ronald Reagan, an idea which was first developed by American statesman Lyndon LaRouche.

Asia
Asia-Pacific Economic Cooperation Summit Reveals Depth of US-China Division
The shared development of anti-missile systems, based on applying "new physical principles", would not only make nuclear weapons "impotent and obsolete," but would foster scientific collaboration is areas such as space exploration, and the development of nuclear fusion energy, which would provide benefits for all nations.   Third, end the thinking behind geopolitics, which operates on the basis of "divide and conquer", and replace it with the "win-win" approach now practiced by the Chinese, with the Belt-and-Road Initiative (BRI). China has succeeded in lifting 800 million people out of poverty in China, and is now using the BRI to do the same in Africa, and in South and Central America.    Instead of trillions of dollars going to wars and destruction, the US could not only work with the BRI, but could join with Russia, China and India as Four Powers, committed to establishing a New Bretton Woods financial system, which would foster peaceful economic development among sovereign states.

*The Schiller Institute is a political and economic think tank founded in 1984 via the philosophies of political activist Lyndon LaRouche and German poet Friedrich Schiller.