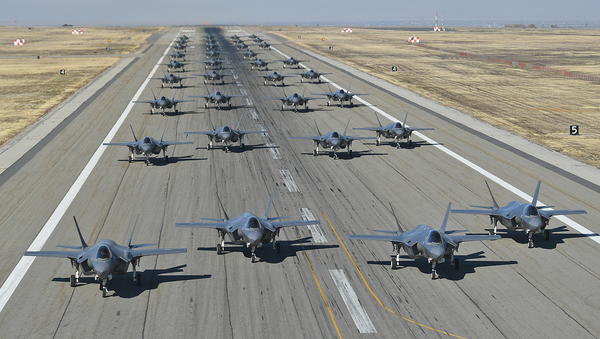 The US Air Force's 388th Fighter Wing and Air Force Reserve 419th Fighter Wing, both stationed at the Hill Air Force Base in northern Utah, staged a combat power exercise this week that involved dozens of F-35A multirole fighter jets.

Dubbed the first-ever "Elephant Walk" exercise to include stealth fighters, the Air Force said in statement that the drills were carried out to show the strength and readiness of the combat-ready F-35A units.

​A total of 35 F-35A jets were launched during the exercise, with aircraft taking off in 20 to 40-second intervals, according to Air Force officials, which indicated that having multiple squadrons take off allows the units to better assess potential issues.

"We are ready to fight tonight, and exercising with multiple squadrons of F-35s can demonstrate our ability to defeat potential adversaries wherever they may arise," Maj. Caleb Guthmann, 34th Fighter Squadron assistant director of operations and exercise project officer, said in a statement on Monday.

​The Standard Examiner reported that all jets were in the air over an 11-minute period. Col. Michael Ebner, the vice commander of the 388th Fighter Wing, told the publication that the short-notice drill was a historic moment for the F-35A program, since it included the highest number of Lightning II jets to be simultaneously launched.

The official doubled down on the remarks made by Guthmann, saying that the fifth-generation fighter was a "global deterrent" against conflict that would work as an advisory to the US' enemies.

​In related F-35A news, the Lockheed Martin-manufactured jet marked a first at Florida's Eglin Air Force Base after successfully deploying a GBU-49 precision bomb during a combat training session that took place earlier this month. 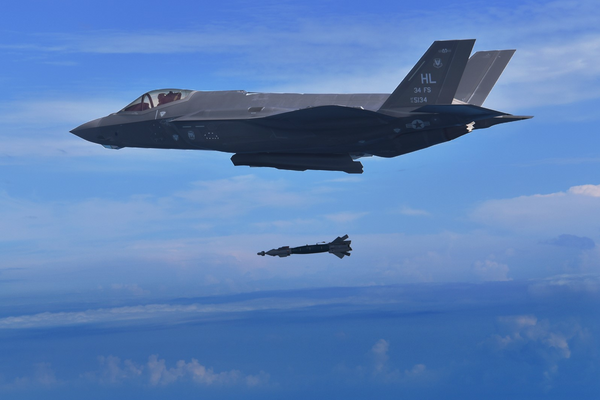 A pilot assigned to the 388th Fighter Wing's 34th Fighter Squadron drops a GBU-49 bomb from an F-35A Lightning II Nov. 7. 2018. The 34th FS is the first unit to employ the GBU-49 in combat training. The squadron recently completed a Combat Hammer weapons evaluation exercise at Eglin Air Force Base, Florida. Pilots say the GBU-49 is effective and accurate and will make the F-35A even more lethal.
© Courtesy of 86th Fighter Weapons Squadron

"It's a really flexible weapon. It was reliable, accurate and effective," Lt. Col. Matthew Johnston, 34th Fighter Squadron commander, said. "Like any new weapon, what we learned, and what we will learn as we continue to train with the GBU-49, will directly impact our tactics and will make the F-35A even more lethal."

The test was conducted on November 7 by the 388th Fighter Wing's 34th Fighter Squadron.