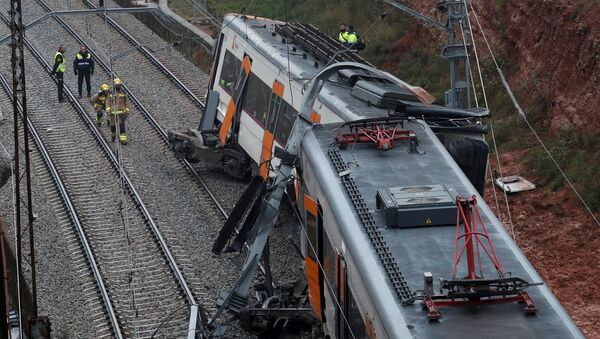 At least one person died and over 40 suffered injuries this morning as a result of a derailment of a commuter train in Catalonia, the General Directorate of Civil Protection said in a statement.

According to the latest information, the last two carriages of a train from the Rodalies de Catalunya company, derailed near Vacarisses, on the R4 line, due to a landslide.

The accident occurred at 6.15 a.m. on a train heading to Barcelona from Sant Vicenç de Calders. The train traffic between Terrassa and Manresa has been temporarily stopped.

​"The train derailment in Catalonia affected a total of 131 people, 1 is dead and over 40 are injured," the General Directorate of Civil Protection said on Twitter.

​Rescue teams, fire brigades, and medics have already started working at the scene.

Catalan President Quim Torra along with Interior Minister Miquel Buch have arrived at the scene.

Catalonia has been battered by heavy rains for several days.