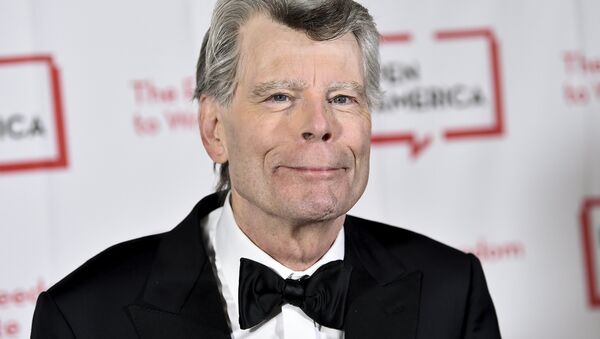 © AFP 2023 / Evan Agostini
Subscribe
International
India
Africa
US President Donald Trump faced criticism over his remarks about retired Admiral William McRaven, whom he called a "Hillary Clinton fan." Trump was also criticised for his attitude towards late Senator John McCain, whom the US president refused to call a hero, referring the fact that he had been captured in the Vietnam War.

Famous author Stephen King slammed US President Trump as a "chickens**t" for his comments in regards to US veterans William McRaven and John McCain, as well as his failure to visit "hot zones."

Trump’s criticism of McRaven and McCain, his spurious draft exemption, and his failure to visit even one of the “hot zones” where he continues to put American lives at risk—all these things point to a central fact: he’s a chickenshit.

A lot of social media supported King's claims, suggesting that the US president is not a very brave man.

but he'd "run" into a school shooting bc he's a hero.

Many Twitterians liked the wordplay in the author's tweet.

“Spurious”. I see what you did there!😁

Though some noted that comparing Trump to chickens is actually unfair… to chickens.

I feel sorry for chickens. They shouldn't have to be compared to the fool who is our president. They're much better than that!

That's not fair to chickens! He is just a disgusting individual, failing to provide any proof that he has any human feelings, with the exception of greed!

One social media user went so far as to say that chickens' "by-products" are more useful than the US president.

Several netizens even suggested that the author should definitely write a book about "chickens**t," claiming that it would be a bestseller.

Can you please write a book called Chickenshit. It will be the scariest ever.

US President Donald Trump recently blasted retired Admiral William McRaven, who orchestrated the killing of Osama Bin Laden, in an interview with Fox News on 18 November. He called the admiral a "Hillary Clinton fan" and an "Obama backer" and suggested that the terrorist number one should have been taken down earlier.

Trump is also known for his criticism towards late Republican Senator John McCain. The US president claimed that the only reason that McCain was called a hero was because he was captured.