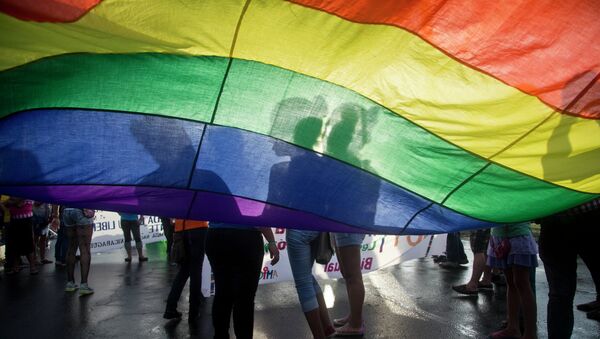 © AP Photo / Esteban Felix
Subscribe
As migrants in a caravan who claim to be fleeing poverty and violence in Central America approach the US-Mexico border, at least seven gay couples decided to conduct a mass wedding.

As the migrant caravan, consisting of thousand of Central Americans as well as migrants from other regions, has approached the US border, it has revealed its rather unexpected side. At least seven gay couples decided to conduct a group wedding ceremony at the border city of Tijuana this weekend, according to an NBC report.

According to the report, the ceremony was officiated by three people from a Unitarian Universalist Church in northern California, who made their way to Tijuana to offer their support. The ceremonies took place at Enclave Caracol, an LGBTQ-friendly space in central Tijuana that has served as shelter for members of the caravan.

In 2015, the US Supreme Court made gay marriage legal across the United States, while the Mexican state of Baja California recognized gay marriage last year. Apparently, the migrants decided to hold the ceremony while still in Mexico over fears that they would be separated while crossing the US border.

"Lesbian, Gay, Bisexual, Transgender and Intersex people (LGBTI) are particularly exposed to violence in the Northern Triangle countries" of Guatemala, Honduras and El Salvador, Amnesty International said in a 2017 report. "This is related intrinsically to the multiple forms of discrimination that LGBTI people face in the different spheres of their family and working life, as part of society more widely and institutionally."

'White, Pale, Stale Male' Executives to Sue Gay Female Boss for Discrimination
The migrants from the caravan claimed that they fled violence in their home states of Honduras, El Salvador and Guatemala. However, most of them refused to apply for asylum in Mexico, as Mexican authorities offered, instead opting to try their luck getting into the United States.

The United States has reinforced its border with military personnel, as it expects the migrants attempt to cross the border illegally. Gang members and child traffickers are also reportedly embedded with the caravan. As Sputnik reported earlier, armed US citizens are assembling near the border to provide volunteer support to government border protection personnel.

One of @into's Tijuana reporters went to a Big Gay Wedding at the LGBTQ migrant caravan, and I am WEEPING. Story by @skinosian with stunning photos by Fred Ramos. https://t.co/t3paWwHYRL pic.twitter.com/ShU4h55JI9

​However, apparently, Baja California citizens are less than enthusiastic about thousands of migrants coming to their state, as well.

Our coverage of the LGBTQ migrant folks seeking asylum through Tijuana continues.

Yesterday 7 couples held weddings as they wait to cross the border. In their origin nations, these weddings are illegal.

​Yesterday, The Guardian published video of Tijuana residents waving Mexican flags and shouting, "Out! Out!" at the caravan, as well as "aquí no te queremos," which translates to "we don't want you here."