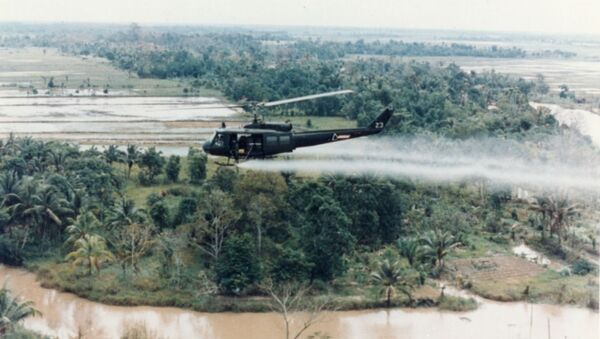 Engineering and medicine researchers at the National Academies of Sciences have discovered evidence linking hypertension among veterans to exposure to Agent Orange during the Vietnam War.

Agent Orange was an herbicide used by the US government during its war on Vietnam for the purpose of defoliating the landscape in order to weed out Vietcong troops. But because of widespread health problems suffered by US veterans who were exposed to the dangerous chemical, it has been linked to cancer and other ailments.

During the war, US troops were told the chemical was harmless, and those harmed by it have had incredible difficulty getting treatment from the government. By 1993, nearly 20 years after the war ended, the Department of Veterans Affairs had only compensated 486 of the 39,419 soldiers who tried to file for disability benefits from being exposed to Agent Orange in Vietnam.

Researchers announced on Thursday that they had discovered sufficient evidence linking monoclonal gammopathy to Agent Orange exposure, in addition to hypertension implications.

Hypertension is the medical term for abnormally high blood pressure, while monoclonal gammopathy is a condition marked by abnormal protein in the patient's blood. While most people with monoclonal gammopathy don't experience symptoms, it can progress into other disorders, including blood cancers.

In response to the new findings, two groups — Vietnam Veterans of America and Veterans of Foreign Wars — called on VA Secretary Robert Wilkie to add the two conditions to its list of disorders suffered by victims of Agent Orange. Currently, there are 14 diseases on the list, which allows veterans with those conditions quicker access to benefits from Veterans Affairs, Stars and Stripes reports.

"We now call on VA Secretary Robert Wilkie to use his authority and recognize the science in the report to swiftly add these two illnesses to the presumptive list so that these veterans can finally receive the assistance they earned and deserve," veterans advocate B.J. Lawrence, Veterans of Foreign Wars National Commander, said in a statement.