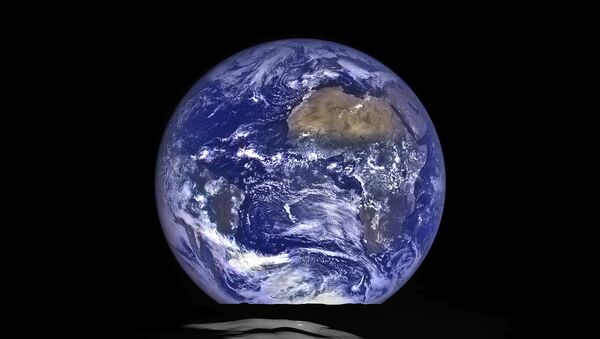 MOSCOW (Sputnik) - Russia's Roscosmos state space corporation and NASA will work on the concept of a lunar orbital station that may be built with the fully-fledged participation of Russia, Roscosmos head Dmitry Rogozin said on Monday.

"Today NASA is highly interested in the full-fledged Russian participation [in development of a lunar station], and I hope that together we will shape the full architecture of the future lunar mission," Rogozin said at a press conference held at the Rossiya Segodnya Information Agency media centre.

He also noted that a new Angara heavy-class carrier rocket was viewed as "a future core transport system to the Moon.”

Russia’s Roscosmos Says to Remain Participant of 1st Moon Orbit Station Project
At the end of September 2017, in the framework of the astronautical congress in Adelaide, Australia, Roscosmos and NASA signed a joint statement, which reflects the partners' intention to work together to implement initiatives in space exploration. It is about planning the creation of a visited station in the near-moon space.

Talking about the projects of the corporation, Rogozin also noted that Roscosmos is ready to build a KAZSAT-2R for Kazakhstan and launch it.

"Building this spacecraft is not just a technological issue, this depends on the point on the orbit that is registered to Russia, so we offer a package deal to our partners. We are ready to build this spacecraft, launch it via our launch systems and allow it to work at that point on the orbit… We do not exclude working with our colleagues from Airbus who can supply the necessary technological equipment. This could be done in cooperation," Rogozin told reporters.

He added that Russia would fulfil its obligations to send an astronaut from the United Arab Emirates to the International Space Station in 2019 despite the delay, caused by the Soyuz-FG rocket incident in October.

The head of the corporation also addressed the issue of the air leak at the Soyuz MS-09 spacecraft.

"We have never accused the Americans, that never happened. That was a dirty interpretation of some publications in the media. We categorically refute these allegations," Rogozin said.

According to the official, a production defect on the crashed Soyuz-FG rocket was likely accidental.

"[Those responsible] will be determined by the bodies that are in charge of that… [The production defect] was likely accidental," Rogozin said at a press conference held at the Rossiya Segodnya Information Agency media center in Moscow.

On August 30, the crew of the International Space Station (ISS) detected an insignificant air leak, caused by a microfracture on a wall of the living section of the Soyuz MS-09 spacecraft, docked to the ISS. The hole was patched on the same day to restore the hermetic integrity of the ISS.

"Our colleagues have shown mathematical models of the October 11 situation… US colleagues, since the crew was mixed, carried out an independent investigation as well," he stated.

According to Rogozin, a production defect on the crashed Soyuz-FG rocket was likely accidental.

"[Those responsible] will be determined by the bodies that are in charge of that… [The production defect] was likely accidental," he added.

An accident occurred minutes after the liftoff of a Soyuz-FG launch vehicle carrying the Soyuz MS-10 spacecraft with two new members of the International Space Station (ISS) crew on board, a US astronaut and a Russian cosmonaut. An emergency escape capsule allowed the crew to return to Earth safely.