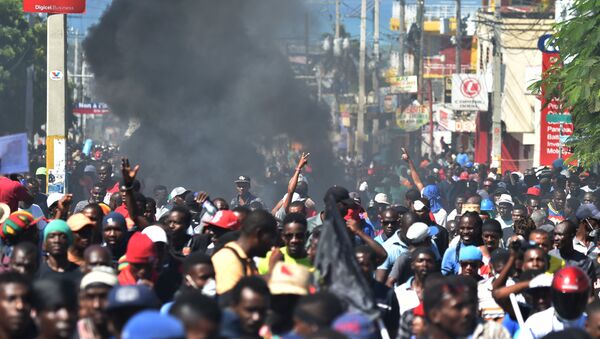 Amid deadly clashes that occurred among protesting crowds across Haiti, the local US Embassy issued an alert warning its employees against leaving their shelters “until further notice” and announced late opening hours the following day.

Thousands of Haitians took to the streets Sunday in the capital city of Port-au-Prince and marched chanting anti-president and anti-corruption slogans, burning tires and flying suggestive black and red flags in opposition to the country’s current state symbol of independence from France, the red and blue banner.

The latter replaced the black and red flag back in 1986, when Haiti’s first democratically elected president, Jean Bertrand Aristide, took office. As many as six people were killed and at least five others wounded during the rallies, which largely embraced an anti-corruption agenda.

The protesters blamed the deaths on the police, claiming that gunmen from the police had appeared in unmarked cars and fired into the crowd, which is something the general director of Haiti’s national police force (PNH) has denied. He asserted that law enforcement had done their best to restrain their use of force against protesters, and a follow-up investigation showed that they had not been involved in the clashes.

One of the activists was quoted by The Voice of America as saying that the blue and red colours “gave us insecurity,” rendering it impossible for them to go to school, to “go where I need to because it’s not safe.” The young man went on to call for the president to leave office “as soon as possible,” with many others chiming in with similar calls.

Large-scale protests hit the capital, Port-au-Prince, and demonstrations of a lesser scale, but under the same slogans, took place in other major cities, such as Jacmel, Gonaives, St. Marc, Jeremie and Cape Haitien. The US Embassy in Haiti even tweeted a warning, requiring  its “American employees to shelter in place until further notice” and going on to announce a delayed opening on Monday.

The Embassy is still requiring its American employees to shelter in place until further notice. Pending no further changes, the Embassy plans to announce a delayed opening (10 a.m., Monday, November 19).

The tweet emerged at a time when no media was reporting on the subject, which was instantly brought up in comments.

Why is no one reporting on this? Haiti is in the midst of a potential coup with our military on the ground. Protesters are being killed by snipers and not a word about this anywhere except on Twitter? https://t.co/L1Eu5vBGAj

Many expressed their solidarity with the Haitians and called for the international community to take note of the across-the-board demonstrations in the Caribbean country.

“We’re in the street today because November 18 is a symbolic day. It was a decisive day for our ancestors — with the help of the gods — where they succeeded in uprooting the French forces. But today the same situation exists because even though we're not enslaved — per se — our rights are being violated — so we’re in the streets asking to end this system… I’m talking about the kind of slavery that is political, economic and even social,” a protester in Gonaives told VOA Creole.

It is noteworthy that November 18 marked a milestone day in Haitian history, as it honoured the 215th anniversary of the Battle of Vertieres, a major victory for Haiti’s slaves in the war for independence against the French army.  The country’s president has historically travelled to Vertieres to lead official ceremonies there; however, this year he abstained from travel and addressed the nation, having laid a wreath at a memorial, saying that the people have to join efforts to resolve the raging crisis.

Death Toll From Major Earthquake in Haiti Grows to 14 – Reports

“It’s time to put our heads together, to cooperate to break the cycle of blackouts, of poverty which has caused some of you to forget who you really are. It’s time to cooperate to make a better nation we can be proud of […],” President Jovenel Moise, who exactly a month ago survived an assassination attempt, said as he took the floor on Sunday.

The rallies came as part of the so-called PetroCaribe protest movement, which advocates for transparency with regard to the misuse of funds earmarked for infrastructure and other social projects as a result of the PetroCaribe oil alliances clinched by Venezuela and Caribbean nations in June 2005 and onward.

In July, Moise accepted the resignation of the country’s Prime Minister Guy Lafontant and his cabinet amid violent protests fuelled by a sharp rise in fuel prices.