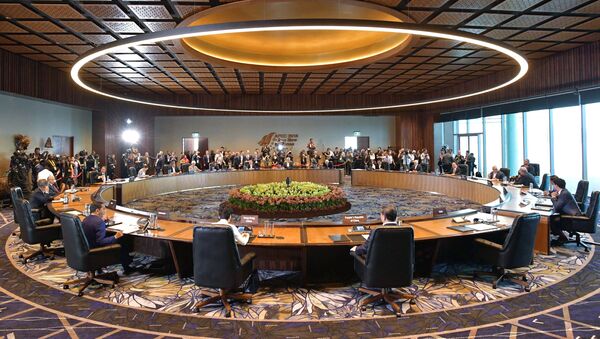 Participants at the Asia-Pacific Economic Cooperation summit in Papua New Guinea adopted a final declaration, which excluded several controversial issues. It was earlier reported that for the first time ever, the summit had concluded with no declaration.

Sputnik: In your view was the APEC summit this year different from previous years and in what way? It does seem unprecedented that they were not able to actually give a final strategic statement. They have left that to the chair of the meeting, haven't they?

World
APEC Fails to Agree on Final Declaration Due to Trade Wars – Russian PM Medvedev
Mehmet Öğütçü: Yes. I think the focus was on trade and investment matters and leaving aside all other controversial disputes including South China Sea matters with China. So it looks like China wants support from other member countries of APEC in terms of promoting further trade liberalisation, globalisation. These are the things which the United States defended all along since the Cold War era. So it's interesting that the roles are changing now.

Trump is trumpeting protectionism in trade, making the United States ‘greater again' while China is acting more responsibly for climate change, on trade matters, investment matters and so the situation is quite telling right now. And it also gives the indications of how the future will be evolving where China will be perhaps undertaking more global roles, more responsible roles than the United States is prepared to.

Sputnik: Well, it's interesting, isn't it? What do you think the main divisions were, where do they lie? It's interesting to note that the participants have adopted the declaration that excluded the controversial points such as the Bogor Goals, the World Trade Organisation, and trade practices. I think that these issues would be covered by the chairperson. Why do you think that is specifically then, is it just this malaise that we are having due to the American protectionism and the malaise with the Chinese government or are there wider issues as well?

Papua New Guinea Braces for Infrastructure Investment After APEC Summit
Mehmet Öğütçü: Well, I mean we all expect by the end of this year and next year there will be more contraction of the world economy. The global prospects are not that good therefore more infrastructure investment, more trade, more investment are clearly in the top agenda and so migration of all the nations of APEC. And where the US is pushing for more protectionism and more sanctions to more than half of the world population, whereas China to Belt and Road Initiative is promoting more infrastructure investment, more trade and facilitating and soft loans.

So this a dichotomy where even countries which are quite anti-Chinese in South East Asia, especially, and they prefer to stay silent vis-à-vis the controversial problems and pushing to the forefront the trade and investment matters where they are all uniting. That's the reason why, I think, such a final declaration emerged from APEC nations. And also I mean there are other issues which are discussed but not so much I like it in the final communique: like the currency war, not only trade war, and the technology competition, cybersecurity and a couple of other critical issues.

So, I think is a strong message also to White House in terms of, if they continue that way towards more protectionist and worse its globalisation, there will be some flashback coming from every part of the world including APEC where the US had high hopes in terms of leading the way in the Pacific.

Sputnik: Now, Mehmet, one of the interesting comments to come out of the summit was the Malaysian prime minister saying that globalisation fuels inequality. What's your take on this particular statement? You have obviously mentioned about globalisation and also protection. Where do you stand between these two strategies?

Mehmet Öğütçü: Well, I don't think that you can have a black and white picture in terms of protectionism versus globalisation. Both of them have their own downsides, but also the benefits. Globalisation, in the beginning, worked very well for the western world because this was the invention they put forward to open markets, liberalise capital flows and what you have, except the free movement of people.

World
APEC Participants Adopt Final Declaration Excluding Some Controversial Issues
But now things have changed considerably, emerging economies are benefitting more and more from globalisation, especially in trade volume if you look at China. They have a trade surplus vis-à-vis US around 325 billion dollars. So, therefore it is benefitting more the emerging economies right now and also it has lifted billions of people out of poverty. But it doesn't mean that globalisation left some of the countries, some unfortunate countries behind, fuelling also inequality and unfair practices.

So, I think there has to be the right balance. You can't have everything free leaving everything to the market economies but on the other hand, you cannot also close your borders, like the US is trying to do with Mexico and elsewhere. You have to find the right balance which will bring more benefits and reflect less downwards impact on the environment and on other issues. Climate change is another issue where again China is taking the lead while the US is leaving this Paris agreement.

World
APEC Summit Focuses on US-China Trade Row, Globalisation Issues
I don't think that there is any black and white picture, and for each nation it might have different consequences. For some nations like the US right now, perhaps, it might be better for them to remain a bit more protectionist to protect their markets and recover the economy and use their competitive strengths while for other countries like China, for them trade and investment means a lot. They can only survive through more trade, and more investment, and more infrastructures. So, I don't think that we are going to have a uniform situation, a homogenous situation in the world economy.

And then it is not only G2, China versus US, but you also have other powerful regional players, like the other BRICS nations, European Union which is an economic superpower but a political dwarf. And so we are going to witness, in my view, over the next decade a more chaotic international order in which there won't be just one dominant power shaping up the current affairs.

The views expressed in this article are solely those of Mehmet Öğütçü and do not necessarily reflect the official position of Sputnik.