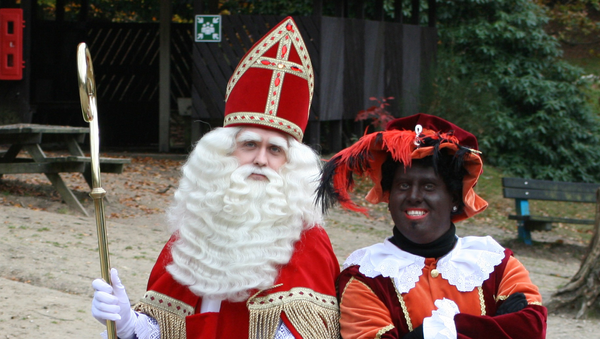 © Wikipedia / http://en.wikipedia.org/wiki/Zwarte_Piet
Subscribe
A servant, widely known as Black Pete, has traditionally accompanied the Dutch Santa Clause, helping him deliver Christmas presents, and is greatly anticipated by kids all around the country. However, Dutch society is not new to rallies against the “racism”-provoking character, but this year a great many voices could be heard in his favour.

The Netherlands has witnessed a number of clashes between supporters and opponents of the contentious Christmas character called Black Pete, with people traditionally painting their faces dark to play the character, a famed helper of the Dutch Santa Claus.

However, opponents have come forward claiming the practice promotes racist stereotypes. Police in Rotterdam, one of the cities where protests have been held, tweeted that they made three arrests throughout the clashes between the demonstrators and Black Pete proponents.

Meanwhile, a televised nationwide parade to welcome Sinterklaas, the Dutch version of St. Nicholas, into the historic village of Zaandijk, in the Amsterdam suburbs, was not interrupted by clashes, which, conversely, took place in Rotterdam, Eindhoven and Groningen and a number of other Dutch locations.

Many rushed to Twitter to share their ideas under a corresponding hashtag, with one claiming that not wanting to offend doesn’t automatically mean that something is not “being offensive.”

I felt awkward for 1 day. But, Imagine living your whole life knowing your countrymen would rather offend you annually than have you and your children feel apart of a country they had an equal claim to. Not wanting to offenddoesn't stop something from being offensive #blackpete pic.twitter.com/tWeCaFRak5

The same person further referred to performances involving Black Pete not as traditional, but as “nostalgic racism that people try to indoctrinate children with.”

Another even admitted to being ashamed to say she wore black face in her childhood thinking “it’d bring happiness.” “It took moving to another country to learn how messed up this is,” she added.

Many more focused on violence, “hooligan groups” flooding the demonstrations in protest, and, most certainly, the authorities' approach.

#Dutch @MinPres says NOT to discuss the #racist character Black Pete. 1 day before demonstrations against it by already threatened #antiracists. This is a dogwhistle in hostile times. NL isn't only weed and a biking pm. It's also a country where free speech is colour-dependent. https://t.co/PsOGmAai8h

This is not merely ‘cowardice’, an unwillingness to speak out in the fear of losing votes; it is, however implicit, an active endorsement of the increasingly violent white nationalism — wrapped in dogwhistles, proclaimed in front of a Dutch flag.

I was born and raised with this tradition. brainwashed into it, really. I'm ashamed to say, I wore the make up myself at 14yo; thinking It'd bring happiness. It took moving to another country to learn how messed up this is. #eyesopened #wakeupnetherlands #zwartepiet #blackpete https://t.co/pNZyW5q3sk

Excellent protest signs against black pete today. I still can’t believe it either that it’s necessary to protest. There’s even neo nazi’s (NVU) and hooligans in counter demos. Isn’t it obvious yet? #kozp https://t.co/PVKGqtOanr

Dutch Prime Minister Mark Rutte, meanwhile, called for calm but expressed doubt whether the tradition should stay intact. “I think society agrees on one thing — we grant children the magic of the Sinterklaas party,” he stressed.

Some netizens, however, attempted to come up with sober, sense-driven comments in defence, noting that Black Pete is black due to climbing down the chimney, suggesting his face resembles to a greater extent that of a coalminer than an African person. Someone even suggested the social move was financed or backed by well-known leftist donor George Soros.

Don't believe the globalist lies that Black Petes are black people. Their faces are black from the chimney's. The globalists are responsible for genocide all around the world, they care nothing about racism. George Soros funds the Stop Black Pete movement directly.

Meanwhile, users started reposting links to a report by the Dutch media outlet Dotcomnieuws, stating that the organization New Urban, which is one of those behind the protests, received funds from Soros in 2014 and 2015.

The anti-black pete movement is supported by Soros. https://t.co/biPqQzLGpY

Other countries, such as Sweden, which also upholds such a tradition, have also been mentioned:

You do know that in Sweden, Zwarte Piet, or “Black Pete” is still a tradition. So they dress up in #blackface. pic.twitter.com/lslniIQbuQ

Many have openly defended Black Pete as nothing more than innocent “fun for the kids”:

Black Pete is no racism! Even my friends from Africa and Suriname says it’s no racisme. Only a select group of people in the Netherlands (about 1000 people) are against it.. come on, it’s a party for childrens.. (video is from Eindhoven Hooligans) #sinterklaasintocht #piete pic.twitter.com/vvsH3JBUha

But many pondered on the peaceful Black Pete demonstrations being countered by violence from the proponents’ side. “Somehow they are the good guys?” one asked emotionally, with many more weighing in the debate.

fuck this country. people were having peaceful protests all over the country against black pete and some yts decide to protest in favor of black pete and use violence and somehow they’re the good guys?? fuck all y’all pic.twitter.com/C1uULdItTc

my parents were attacked and pelted with rotted eggs at an anti-racism protest against black pete and they got taken away by riot police to protect them this country is like. a fucking joke