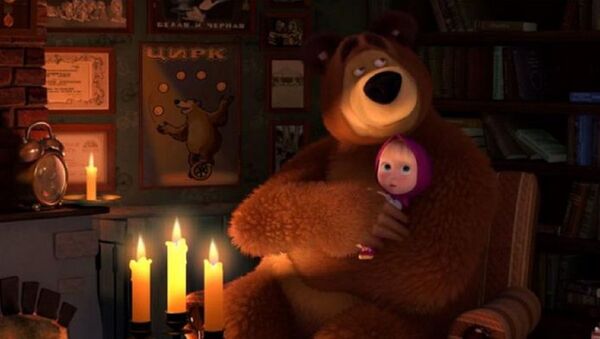 © YouTube
Subscribe
The other day, iconic British broadsheet newspaper The Times published an article calling the hit Russian kids’ series the Kremlin's "soft propaganda" tool and on top of that drew a number of parallels between the main character, moody and energetic Masha, and President Putin, causing the series’ producers to give it all a decent hearty laugh.

The Russian Embassy in London has mocked British media reports on Kremlin propaganda in the well-known cartoon “Masha and the Bear.” The embassy took to Twitter and published a pointed comment on The Times’ recent op-ed accompanying it with a link to the edition’s social network page.

“How UK can find salvation from ‘Masha and the Bear’? Launch an Ant-Cartoon Excellence Centre somewhere in the Baltic? Place all cartoonists on EU sanction list? Clearly a decisive – and a very expensive – approach is needed!” the diplomats tweeted.

Twitter users naturally detected the irony in those words at once, with one even bringing up Belling Cat’s investigative attempts:

If you look closely Masha is giving hand signals to Russian overseas operatives. Shhh keep it a secret

Soon Bellingcat will find out in which military unit serve to Masha and the Bear.😅

Another appeared to have treated The Times’ article as “a good advert,” adding that her greatgrandchildren share her “absolute delight to watch it.”

The article in the Times is the best advertisement. Now tens of millions of people from all over the world will watch this cartoon, they will surely like it and the number of fans will grow)

Responding to one user’s question on the reasons for the cartoon bear’s tremendous popularity, another butted in: “Coz…coz…Putin,” thereby referring to common Western-devised rhetoric that the Russian president is to blame for whatever happens.

Forgive me, i don't know what you're on about😀
I was mocking the above headline by putting the blame for the bears popularity on Putin, he gets the blame for almost everything else!😀

They blame Vladimir Putin because they envy him. They will never get close to his shadow.

​Because people love this cartoon, it is simple and kind,and therefore brilliant.Envy, what else?

with one quipping that the ”foolish” Times’ mission had gone awry.

The mission of thetimes is failed. They showed their foolishness.

Another chimed in enthusiastically asking for more “Russian propaganda” to be aired:

Could we have more of this Russian propaganda please. my daughter's love it #autism #autismparents and the end of season 2 made my Father-in-Law cry.

“Soooo, kids’ cartoons are already undermining the economy and policies of the Great state of Britain?”

Another also sent jabs at the British edition’s “research efforts”:

https://t.co/wDtBR74fvN
For example, I feel a huge black propaganda against western culture in this video, haha! I think British universities should do research on that. Let @thetimes spend their free time writing articles on such nonsenses.😎
Кстати, Маша, ты — замечательный!

I always watch Masha & The Bear with my nephew, he is very happy watching this cartoon. I don't know what have those people in their heads, saying a such of thing about a cartoon, I think they have 💩💩instead of a brain.

The creators of the animated series, which is now wildly popular abroad, stated earlier that they view The Times’ expert’s parallels between the series’ main character and Putin with humour and a deal of irony.

"It’s seriously difficult to comment on it, only with a great deal of irony. The Times would have been better off writing that Masha behaves like [former UK Prime Minister Winston] Churchill," the head of the cartoon's production studio Animaccord, Dmitry Loveyko, told Sputnik on Saturday.

Earlier in the week, UK-based newspaper The Times published an article calling the series the Kremlin's "soft propaganda" tool and pointed to similarities between Masha and the personality of Russian President Vladimir Putin. The publication quoted Professor  Anthony Glees of the University of Buckingham characterizing Masha as "feisty, even rather nasty, but also plucky." According to the professor, she "punches above her slight weight," and it is "not far-fetched to see her as Putinesque."

There were also reports on Lithuanian lawmakers striving to ban the animated series from state telivision due to similar concerns over the cartoon's "propaganda nature," with Masha allegedly symbolizing Russian agression.

Masha and the Bear Phenomenon

The animated series, filmed by the Russian studio Animaccord, has been translated into a staggering 25 languages and is aired in 100 countries, to the joy of millions of its loyal fans all over the world. The episode “Masha plus porridge” has even broken a record on YouTube having racked up about 2 billion views on the major video hosting site as of October 2018.

The streaming service Netflix has since billed the Russian production as a “Russian phenomenon,” with experts worldwide agreeing that the secret lies in the wide applicability of the narrative based on a Russian folktale tale about a girl called Masha and eternal issues raised in the story.

READ MORE: 'Soros-Backed': Public Takes Swipe at Black Pete Protestors in Netherlands
000000
Popular comments
I'm really amazed with UK, when i think they have invented the biggest stupidity in the universe, they manage to create one bigger. By the way I love the Bear, he is one of the greatest cartoons characters ever!
BlauMax
18 November 2018, 18:56 GMT6
000000
Who is next Maya the Bee and Winnie the Pooh? Peppa Pig please defend UK.