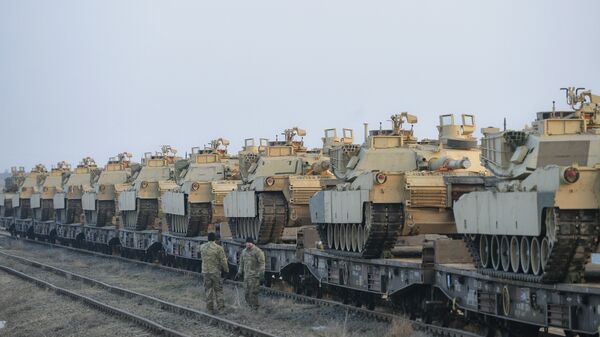 The Pentagon has failed the first-ever comprehensive audit of its whopping $2.7 trillion in assets, with just five among more than 50 DoD entities earning a passing grade, with mismanagement of funds, inventory discrepancies, security problems and other issues plaguing the rest.

On Friday, a day after the audit's findings were publicized, the Pentagon confirmed that it could not provide the public with "reasonable assurance" on how its spends taxpayers' money, with major problems found in various departments' accounting practices, including pervasive misstatements on spending, the identification of inventory which didn't actually exist in the real world, issues with contractors' recordkeeping, and the purchase of millions of dollars of equipment which is then stored unused in DoD warehouses.

Pentagon Fails Audit as Official Admits 'We Never Thought We Were Going to Pass'
Pentagon officials did their best to take the sting out of the audit's findings, saying it was an important milestone for the audit to have taken place at all. "We never thought we were going to pass an audit, right? Everyone was betting against us, that we wouldn't even do the audit," Deputy Secretary of Defence Patrick Shanahan said. Acting Pentagon inspector general Glenn Fine said that "the most important thing this year is not the [findings], but that the department takes the audit seriously and seeks to fix the identified deficiencies, which the department is doing."

1/5: Last week we released the first-ever @DeptofDefense audit, a historic accomplishment that indicates our commitment to accountability and reform.

Others were not as optimistic, however, with everyone from politicians and journalists to ordinary Americans venting their frustrations on the Pentagon's bloated state on Twitter.

"This is exactly why we must #AuditThePentagon," Democratic Congresswoman Barbara Lee tweeted. "The unchecked waste, fraud, and abuse at the Pentagon is an insult to the American people," she stressed.

This is exactly why we must #AuditThePentagon. The unchecked waste, fraud and abuse at the Pentagon is an insult to the American people. https://t.co/JLe5EKfmXk

Other politicians, Republican and Democrat alike, chimed in with similar commentary, voicing concerns and trying to take the credit for the audit initiative, which was one of President Trump's campaign pledges in 2016.

The Pentagon must make every effort to crack down on this unchecked waste, fraud, and abuse to ensure that taxpayer dollars are being spent responsibly. #AuditThePentagon https://t.co/2WakbSiEmz

The public has been waiting decades for the @DeptofDefense to undergo an audit as required by law. I pushed them to fix this issue for years. The first step to solving problems is admitting you have one. https://t.co/iIlQfwNRXX

Some users suggested that the egregious waste was an example of Washington's misplaced priorities, pointing out that just a fraction of what is spent on defence could easily fund other important programs, such as healthcare.

Here’s something to remember next time you hear “we simply can’t afford it.” https://t.co/L05LOrhTH0

The audit on the $2.7 trillion dollar Pentagon failed. It's budget this year is $700 Billion. Meanwhile: https://t.co/uWAY78uaxL? pic.twitter.com/nFzewsCSys

The Pentagon has conducted its first-ever audit. And failed.

The US Department of Defense has $2.7 trillion in assets, making it the 17th largest entity on Earth.

All of Africa has $2.6 trillion in assets.https://t.co/BBAzkc6Yzl

Others were simply baffled by the Pentagon's nonchalant approach, saying officials were treating it "as if failing an audit is no big deal," and pointing out that for ordinary Americans, failing an audit could mean jail time.

The Pentagon — the largest US government institution — just failed its first-ever audit.

And the deputy secretary of defense just casually told reporters, "We failed the audit, but we never expected to pass it," as if failing an audit is no big deal.https://t.co/6RbeNLqT0H

#Pentagon just spent $360 Million to audit ONE Financial year!!
And FAILED of course…
We already knew the Pentagon had "Lost" TRILLIONS!!!
This is just the tip of the ice(((berg)))

Where's the accountability?
Rest of us would be in JAIL 😡https://t.co/mQZWE7ywuf

In accounting, audit specifically, there is a term called "materiality". Meaning is the boo-boo big enough to impact the financial statements as a whole? If so, the audit fails.

I guess trillions of missing/unaccounted for money is a pretty big booboo🤑https://t.co/wmzycXXXa2

Some users were concerned about the price tag of the audit itself.

@Ocasio2018 Can you bring this up in Congress this week? How can an audit cost almost half a billion? The pentagon is way to big to audit anyways and they failed of course. What else could we have spent half of a Billion on? #helpthepoor pic.twitter.com/84dsZDOlNl

So between the audit and the bloated "cost to fix", one billion tax dollars are being spent to make the pentagon more efficient. Am I the only one who sees the crippling irony here? https://t.co/VpS3yzbkSe

“The pentagon failed its first audit.”