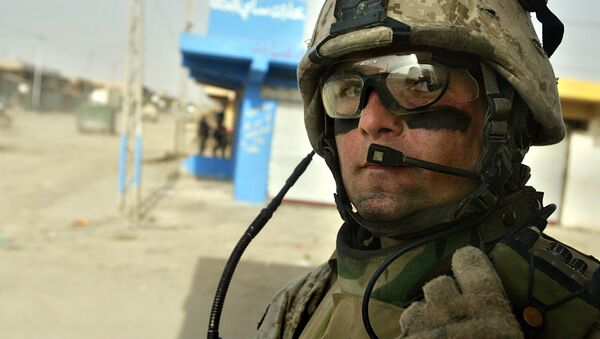 © AP Photo / Jacob Silberberg
Subscribe
In the aftermath of the deadly 9/11 terrorist attacks, the US has spent over $5.9 trillion on wars abroad that have resulted in the deaths of an estimated 500,000 people, according to Costs of War, research published by the Watson Institute for International and Public Affairs at Rhode Island’s Brown University.

‘Worse Than Ever’: Afghanistan Sees Bloodiest Election Season Ever
The report, published this month, reveals that some 370,000 people have died directly from violence related to US wars, while many more have died from malnutrition and devastated infrastructure. An estimated 250,000 civilians have died in American-led wars and over 10.1 million people have been displaced.

These numbers do not take into account the more than a half million deaths caused by the war in Syria after the US government and other powers tried to topple Syrian President Bashar Al-Assad's government in 2011.

The US-led coalition of more than 70 nations have been conducting military operations against the Daesh terrorist group in Syria and Iraq since September 2014. The US coalition's deadly activities in Syria are not authorized by the Syrian government or the UN Security Council.

The report also found that the cost of US-led wars in Iraq, Afghanistan, Pakistan and Syria has cost the nation around $5.9 trillion.

That is not a typo. It's $5.9 trillion that the United States has spent to prosecute multiple wars around the globe since 2001.

According to the report, this number differs widely from Pentagon cost estimates for all the US-led wars following 9/11 "because it includes not only war appropriations made to the Department of Defense — spending in the war zones of Iraq, Syria, Afghanistan, Pakistan, and in other places the government designates as sites of ‘overseas contingency operations,' — but also includes spending across the federal government that is a consequence of these wars," cited by the Brown University report.

In March 2018, the US Department of Defense claimed that it had only spent $1.5 trillion on "war-related" expenses since 9/11.

In addition, the current post-9/11 US-led wars were paid for almost exclusively by borrowing, which both increased the national debt and the US budget deficit, according to the report.

"Unless the US immediately repays the money borrowed for war, there will also be future interest payments. We estimate that interest payments could total over $7.9 trillion by 2053," the report warns.

"There is no strategy for ending the wars," political science professor Neta Crawford writes in the report.

"The fact that the US keeps spending huge sums for wars that, at least in Afghanistan, are in a stalemate, and in Iraq and Syria, are unresolved, is a long-term budgetary problem which will affect future generations," she noted.

000000
Popular comments
WAY MORE THAN 500,000 60 Minutes interview with Madeline Albright where she stated that 500,000 children alone were killed, AND IT WAS WORTH IT. Over 1,500,000 Iraqis were killed. Many of them women and children. Pick any other middle east "conflict" and total them up. America has been held hostage of the globalists who have used their youth and wealth to grow the global corporate domination. America has a lot to be ashamed of, BUT it is the "robber barons" the "rich men of the earth" who should be made to pay.
dak_kol
18 November 2018, 03:10 GMT3
000000
No private contractor should be allowed to make weapons for the military. At the most they should only be allowed to make guns for domestic use by private citizens. Only small local companies (not multi-nationals) should have a permit to make guns for citizens. This money making racket that currently exists needs to be shut down.
rplender1
18 November 2018, 02:53 GMT2
000000
Newsfeed
0
New firstOld first
loader
LIVE
Заголовок открываемого материала
Access to the chat has been blocked for violating the rules . You will be able to participate again through:∞. If you do not agree with the blocking, please use the feedback form
The discussion is closed. You can participate in the discussion within 24 hours after the publication of the article.
To participate in the discussion
log in or register
loader
Chats
Заголовок открываемого материала
Worldwide
InternationalEnglishEnglishMundoEspañolSpanish
Europe
DeutschlandDeutschGermanFranceFrançaisFrenchΕλλάδαΕλληνικάGreekItaliaItalianoItalianČeská republikaČeštinaCzechPolskaPolskiPolishСрбиjаСрпскиSerbianLatvijaLatviešuLatvianLietuvaLietuviųLithuanianMoldovaMoldoveneascăMoldavianБеларусьБеларускiBelarusian
Transcaucasia
ԱրմենիաՀայերենArmenianАҧсныАҧсышәалаAbkhazХуссар ИрыстонИронауОssetianსაქართველოქართულიGeorgianAzərbaycanАzərbaycancaAzerbaijani
Middle East
Sputnik عربيArabicArabicTürkiyeTürkçeTurkishSputnik ایرانPersianPersianSputnik افغانستانDariDari
Central Asia
ҚазақстанҚазақ тіліKazakhКыргызстанКыргызчаKyrgyzOʻzbekistonЎзбекчаUzbekТоҷикистонТоҷикӣTajik
East & Southeast Asia
Việt NamTiếng ViệtVietnamese日本日本語Japanese俄罗斯卫星通讯社中文（简体）Chinese (simplified)俄罗斯卫星通讯社中文（繁体）Chinese (traditional)
South America
BrasilPortuguêsPortuguese
NewsfeedBreaking
06:10 GMTThe Bennett-Lapid Government's First 100 Days: What Promises Have They Broken?
05:52 GMTPowerful Earthquake in Australia Damages at Least 46 Buildings
05:42 GMTUK Reportedly Mulls Joining US-Mexico-Canada Trade Deal as FTA With America Stalls
05:24 GMTBrazilian Health Minister, Who Arrived at UN, Says Contracted COVID-19
04:30 GMTA Sigh That Tells It All: Golden Retriever Wants Attention
04:28 GMTLive Updates: Germany Registers 10,454 New COVID-19 Cases
04:11 GMTFlorida Gov. Orders All State Agencies to Search for Laundrie After Petito's Remains Confirmed
03:43 GMT'Nothing New on That': Bill Gates Brushes Off Question About His ‘Dinners’ With Epstein
03:33 GMTGOP Politicians Stand by US Border Patrol After Claims They 'Whipped' Refugees at Rio Grande River
03:14 GMTPele Cheers Up Fans by Posting Video of Him Riding Exercycle in Hospital
03:07 GMTAxis of Resistance Killed US, Israeli Commanders in Revenge for Soleimani's Assassination - Report
02:56 GMTPolitical Capital & GOP in His ’Grip’: Trump ’Wants Back’ in 2024, Journos Say
01:43 GMTIRGC Chief: Iran No Longer Sees US as Threat - Report
01:18 GMTChinese Covid Vaccines Reach 100 Nations, But WHO Warns Africa Still Short 470 Million Shots in 2021
01:04 GMTAwkward Moment as White House Staff Cuts Off Biden-Johnson Meeting in Mid-Sentence
00:20 GMTVideo: Military Jet Intercepts Small Aircraft Over NYC in the Middle of UN General Assembly
00:19 GMTPark Ranger ‘Implored’ Gabby Petito to Distance Herself From Toxic Relationship With Brian Laundrie
YesterdayVideos: 6.0 Earthquake Strikes Southeastern Australia
YesterdayPro-Reunification Candidate Chang Ya-chung Edges Ahead as Chairman Election in Taiwan’s KMT Nears
YesterdayTexas Governor Vows to Prevent Del Rio Migrant Surge Disaster From Being Replicated